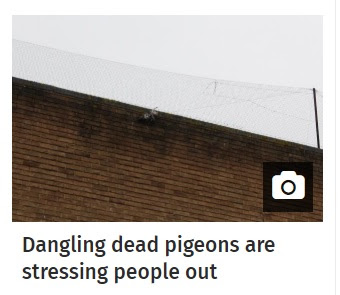 Rachel Barton said she often walks past the “distressing sight”.

Well, walk another route them!


“Even some of the staff at the Co-op are getting stressed about this.”

Rachel said it had been happening for some time and little was being done about it.

What do you expect to be done about it?


Rachel has also contacted the RSPCA about the issue but it said it did not have the resources to deal with the situation and the netting, which is there to deter birds, was the Co-op’s responsibility.

Should have told them there was a camera crew present, love!

In the comments, a wag appears: