While I answered emails, listened to Radio 2 & drank a nice cuppa in the early morning of Christmas Day, two stories in the 'Mail' caught my eye. 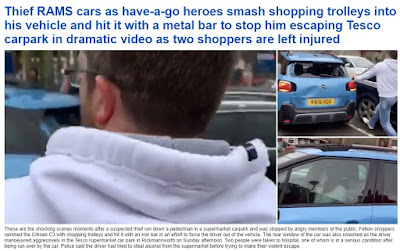 The thing that struck me about this one was how un-English it seemed. No-one sat back and awaited the cops. They got stuck in. It reminded me of videos from Third World countries where there's little expectation that the State will be of any use, and people therefore handle things themselves.

Of course, that usually ends with the miscreants dragged from the car and beaten to death. But baby steps, eh?

And the very next story made me wonder if we will see more of this in 2019:

Three weeks? How long did he get? Well, brace yourselves:


Two children, one boy and one girl, were relentlessly abused by the man, now 18, when they were aged just five and eight during twisted games of 'murder in the dark'.

Their family, from Devon, took comfort after their 'nightmare' earlier this year when the man was jailed for a year, subjected to a restraining order and made to sign the Sex Offender's Register.


But just weeks later, that was overturned. The family, who cannot be named to protect their children's identities, said the justice system has 'utterly failed' them.

Does anyone disagree with that assessment? I can't.


The appealed decision was not made public and it took MailOnline months to get confirmation from the courts.

The authorities know how it's going to play with the population. Hiding it shows that.


'My children cannot walk freely in their own village. What messages does that send to other children? Should they come forward?

'Three weeks. I just found that such a ridiculous. It's preposterous. You would get longer for theft. That's the end of the line now. No further action.

'This is the most painful thing a family can go through. We discovered our two children were horribly sexually abused. It was hard to come to terms with and for all that pain - this is what we ended up with.'

I predict we'll see more and more people turning their backs on State agencies to resolve their problems in 2019. And I can't find it in my heart to blame them.
Posted by JuliaM at 11:00

Email ThisBlogThis!Share to TwitterShare to FacebookShare to Pinterest
Labels: beyond belief, let the state sort it out, modern society, the State is not your friend

You would get longer for theft.

You would, a child such as the rapist was at the time, probably wouldn't...judging by countless posts from Jools where even violent child tealeaves get off with a supportive message on their facebook from the judge.

And I hope those Have-A-Gos have personal liability insurance for when their VICTIM sues them for whiplash and mental distress.

I might have got the story wrong, but I think I read somewhere recently that in the USA, the decapitated corpse of a rapist released on bail was delivered to the corresponding judge's house.

It's as if the PTB want to encourage mob "justice". This man will never feel safe from attack if he stays in the same town, which is some small comfort.

I saw that footage on FB and thought to myself "shoplifters trying to escape" and not some sort of trolley rage incident. The car will be hired and possibly by scum using false details. Imagine explaining that damage to Hertz if you were decent folk!!!
Hiring cheap cars is a common MO by vermin thieves and drug dealers as they make so much money and want to stay anonymous. If they drive their own cars police get to recognise them plus the ANPR is very efficient. They go and change them every few days to get a "clean" one.
Jaded

Have a go heroes was how it used to be here before we got all soft and a punch of pansies believing plod when they say leave it to us and the justice system. It has taken a while but we are finally starting to realise the state is not on our side.

I seem to recall that the police were responding to repeated calls about shoplifting with letters that basically said 'Not our problem, deal with it yourself'. If I had owned a shop I would have taken this as an instruction to build myself my own S&M dungeon for the benefit of anyone caught shoplifting. I could later produce my letter from the police in court.

to build myself my own S&M dungeon- Stony

*cue Nigella voice* "this isn't just a dungeon, its an M&S dungeon"

Stonyground. Bring out the gimp.