From The 'Well, You Should Know...' Files 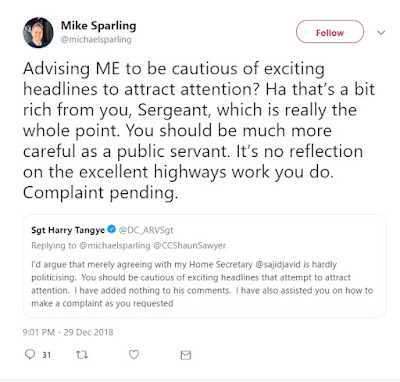 Who is Mike Sparling (the man who doesn't know that police are Crown servants)?


A failed Labour election candidate has been sacked from his police job after taking days off sick so he could canvas for the election.

Mike Sparling, 32, was confronted by his bosses with pictures of him on social media knocking on doors to try and win votes in the build-up to the poll.

At the time he was employed by Devon and Cornwall Police as a 999-call handler in Plymouth, Devon, after getting through a rigorous selection programme.

He managed to convince plod to employ him but he then fell into the faceplant trap - stupidly boasting to people that he was helping a liebour candiddte when he should have been at work.
His union rep attended the disciplinary and, it seems, didn't waste his time defending the indefensible!


The mainstream media is finally starting to run the article about the Trump supporter college student who got kicked out of medical school at the University of Virginia for publicly debating with a far-left SJW communist professor. Here are two new ones:

Reddit is freaking out about the story too, of course. 1000s of comments on these threads:


This story, known as MedGate, has the potential to create a mass public outcry against our far left college system, and thus cause real damage to the student debt loan bubble.

Police officers are NOT Crown servants. They are officers of the Crown, owing allegiance to the Crown, and given a warrant to maintain the peace, in the name of the Crown, i.e. the Queen's peace.
In lying about being ill in order to canvass for a political reason, Sparling may have committed the offences of, in no particular order, malfeasance in a public office (employed in a taxpayer funded role and still receiving payment though deliberately failing to carry out that role); attempting to obtain pecuniary advantage by deception (lying to avoid work in the hope that being elected to the council will provide him with more money), or basic fraud. The fact that possibly even more taxpayer's money may be spent on overtime for Sparling's co-workers, who would have to fill his vacant chair, seems to have been ignored.
Still,seems about right for a budding politician.
Penseivat

"Rigorously striving to employ the otherwise unemployable, no doubt."

The Army should learn from this debacle. But I fear it's too late...

"His union rep attended the disciplinary and, it seems, didn't waste his time defending the indefensible!"

Even he could see what a prize plum the man was! Wonder what job he's in now?

"This story, known as MedGate, has the potential to create a mass public outcry against our far left college system, and thus cause real damage to the student debt loan bubble."

I'd really love to think so, but I fear if none of the other many, many incidents didn't...

"Police officers are NOT Crown servants. They are officers of the Crown..."