This Explains A Hell Of A Lot About 'Guardian' Columnists... 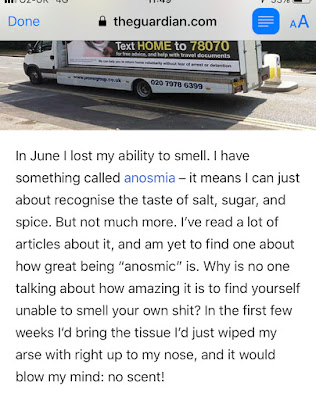 To be honest, I always lift da tissue to smell the last wipe. I probably shouldn't, but habits will persist.

So a Guardian columnist could be a total shit-for-brains and only the readers would notice? Nothing new there, then . . .

I wish Diane Abbott would stop tweeting about these things!
Penseivat

Is anosmia widespread among our enriched folk? Judging by the stench on buses, trains & underground, I think it must be more common than previously suspected!

That explains many things. How they are able to miss the bullshit they hear on a daily basis and why salt, sugar and food have such a disproportional impact on them.

"I probably shouldn't, but habits will persist."

"Judging by the stench on buses, trains & underground..."

Soap and deodorant as obviously not oppressing them! I dread summer... :(