I Thought Begging Letters Were Frowned On..?

Concerned Bromley headteachers have banded together to write to parents over significant concerns with...

The appalling behaviour of the children they are expected to teach?


More than a dozen secondary heads sent the letter home yesterday outlining worries over a lack of investment, budget cuts and classroom sizes.

According to the letter, heads “felt it necessary to demonstrate that these issues are not unique to any one school”.

There's more than a dozen schools in Bromley, though. I guess it isn't an issue for the others?


The letter said: “As we commit to the campaign for improved levels of funding for our schools and pupils, we feel fortunate that we are so strongly supported by parent and carers.

“We know that a number of parents have made representations to their local MP, to the Department for Education and wider government.”

So you're basically asking parents to lobby the authorities?


The Department for Education has said previously that school funding is at its “highest ever level, rising from almost £4bn in 2017 to £43bn by 2020.”

Hmmm. Where's the money going, then?

Maybe the comments will shed some light: 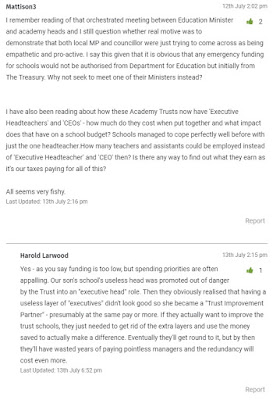 Email ThisBlogThis!Share to TwitterShare to FacebookShare to Pinterest
Labels: progressives, schools, throwing money down the drain

Seems that these schools are following the NHS trust method of working - too many bosses and not enough workers and most of the workers are useless.

When government 'pays', sense goes out the window.