Graffiti vandals have a “human right” to express themselves...


...says a fledgling city councillor. Recently elected Canterbury Labour member Mel Dawkins made her bold claim during a debate about increasing fines for the offence.

Of course it's Labour. The criminal's friend.

No doubt muttering under his breath '...you stupid woman'.


But she continued: “You can’t stop creativity and I don’t think increasing fines will be a successful deterrent. It’s squishing something that everyone has the right to do.”

Here's the 'lady' in question. Be a shame if anyone defaced this photo and...wait, no it wouldn't. It'd be art! 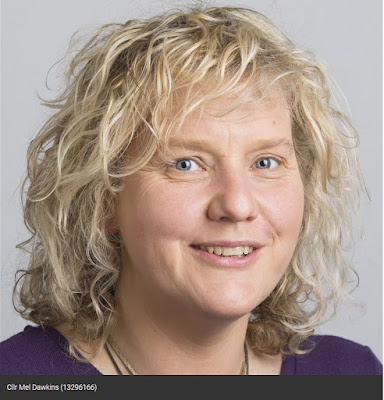 The bid to increase fines was recommended for approval by the committee by eight votes to four. Another proposal to crack down on fly-tipping was also backed.

Yes, you read that right. There's three more morons as well as her.
Posted by JuliaM at 09:00

I wonder what her reaction would be if someone graffiti'ed her house?

I take it there’s a brush/comb shortage in Canterbury, going by the photo.

Good to see you back Melvin. And having a dig at Jaded too. That's brightened my day.

Jaded,
Don't bother. He will only take his stupidity and beat you over the head with it.

Nice to see a love-fest on here between Feral and the Huddersfield half-wit. I'm going to buy shares in a tin-foil company and make a fortune.
Jaded

Given any thought to foiling crime, Jaded?

Nice answer Melvin. I'll give you that one. Don't push it though...
Jaded

'Don't push it though...' No injury was intended, Jaded. I normally pitch the ball a few inches above your head.

"I wonder what her reaction would be if someone graffiti'ed her house?"

"I take it there’s a brush/comb shortage in Canterbury, going by the photo."