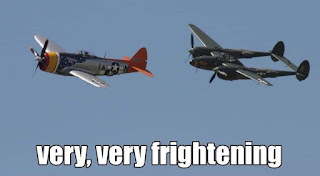 A guy is sitting at an airport bar when he noticed a beautiful woman sitting next to him. He thought to himself, "Wow, she's so gorgeous she must be a flight attendant. But which airline does she work for?" Hoping to pick her up, he leaned towards her and uttered the BA slogan: "To Fly. To Serve?" She gave him a blank, confused stare and he immediately thought to himself, " ooh shit, she doesn't work for BA". A moment later, another slogan popped into his head. He leaned towards her again, "Something special in the air?" She gave him the same confused look. He mentally kicked himself, and scratched American Airlines off the list. Next he tried the United slogan: "I would really love to fly your friendly skies?" This time the woman turned on him "What the f**k do you want?" The man smiled, then slumped back in his chair, and said... "ahhh, Ryanair".

"The man smiled, then slumped back in his chair, and said... "ahhh, Ryanair"."