It Seems The Labour Party Just Admitted It Lies On Its Campaign Literature...

...not that we didn't already suspect that, mind you!

A Labour MP has apologised for handing out campaign leaflets promising would-be voters that her party would 'deal with Traveller incursions.'

Shadow women and equalities minister Charlotte Nichols had been delivering leaflets for the Party ahead of local elections in the Orford area of her constituency. Among the promises listed on the leaflet which featured the Labour Party's logo was a pledge to 'deal with Traveller incursions,' causing widespread anger among residents and on social media.

Not, presumably, the residents fed up with the mess and crimr associated with illegal encampments?

Certainly, plenty of the wooly-minded keyboard warriors - like this idiot - weighed in: 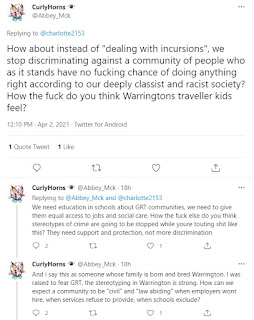 She later apologised in a statement for the 'hurt caused' among the Gypsy, Roma and Traveller (GRT) communities, assuring people it was not in line with her personal views, or that of the party.

So your party won't deal witth traveller incusions?  But will promise to on its campaign literature in order to garner votes? I can't see any other way to interpret this...

In an earlier statement following outrage on social media over the leaflet, she said she had not been aware of the 'problematic definition' of incursions, which means a sudden invasion or attack.

A 'sudden invasion' is exactly what they are, and you know it.

I've said this numerous times. Pikeys really do see themselves as oppressed which justifies their disgusting behaviour. You can't reason with them.
Jaded

How do you provide equal access to jobs for people who get up and leave every so often? When you employ someone you make every attempt to make sure that you get someone fairly permanent so that you don't have to start the recruitment process all over again.

Unravel the statements and you will see that they are admitting that the rule of law applies to some more than others. Something which we knew all along.

Labour at its very best, who would trust this group?

Why does anyone care? It's not like the pikeys bother to vote or anything

Just re-issue the leaflet to say, "deal with caravan incursions" then everyone will be happy as caravanners are not a protected species but everyone will know what is meant.

"You can't reason with them."

"How do you provide equal access to jobs for people who get up and leave every so often?"

You can't. And they know this.

"...they are admitting that the rule of law applies to some more than others."

"Why does anyone care? It's not like the pikeys bother to vote or anything"

Good point. But the white middle class liberals in Chelsea and Kensington on whom the modern Labour Party depend for votes appear, unaccountably, to cherish them. Probably because they've never met any, and are never likely to...