Yes, I'm Sure The Danger Is In Arabella's Unsocialised Cockerpoo Puppy... 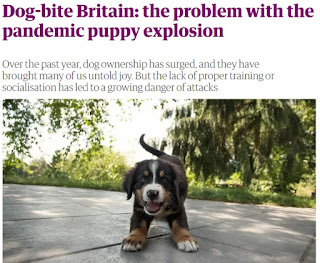 ...and not Duwayne's trained killer pitbull.

I mean, even their initial story bears that out!

Forman had seen the rottweiler before. It spent its days penned in a front garden, looking forlorn. In late October, Forman had dropped Nellie at her parents’ house after a morning walk, and was heading home to get ready for work. “I saw the owner first, standing on the edge of the pavement with the dog,” she recalls. She squeezed between the pair and some railings when the dog began to bark. “And then it just leapt up at me,” she says. “It was aiming for my face, but I put my arm up, and it took a massive chunk of it clean off. I couldn’t feel anything at first because it had taken all the nerve endings.”

Forman had joined the unfortunate ranks of Britain’s dog-bite survivors.

But not, you'll note, from the cockerpoo pup she'd bought.

Some cases grab the headlines, and cannot simply be blamed on the pandemic.

The Pet Food Manufacturers’ Association estimates there are now 12 million dogs in the UK, up about 2 million in 12 months. French bulldogs and labradors have been the most popular new dogs, according to analysis of pet insurance quotes by GoCompare.

And there's an obvious difference - if next door's Frenchie goes for my ankles, I can stomp the little sod into the middle of next week.

The Labrador might pose more of a threat, but not as much as a dog that refuses to give up the attack after being kicked by a draught horse or shot with a taser or battered by desperate bystanders...

As pandemic puppies grow into dogs with sharp teeth, too many lack the training to walk safely into the post-lockdown world. Meanwhile, dogs that do remember a life before Covid are on edge after a topsy-turvy year and face more upheaval as lockdown restrictions are eased. “Puppies haven’t been getting the same mental stimulation they would have done,” says Dr Jenna Kiddie, the head of canine behaviour at the Dogs Trust. “They haven’t been exposed to visitors to the home in the same way or been around other dogs. So we’re very worried about how they’re going to respond. Because they will probably respond with fear, and one way a dog can cope with fear is to use aggression.”

Typically, the dog advocates are out in force. Sensing a threat to their livelihood.

Westgarth, whose book The Happy Dog Owner is out this month, says that even dog trainers often share the commonly held view that some attacks are inevitable and associated with certain breeds – and certain types of owners.

Any breed can bite, Westgarth adds.

Yes, it can. And if the West Highland terrier a few doors down nips me, I'm probably going to A&E for stiches. Not to the mortuary.

12 million dogs in the UK ? most I believe are in bleeding Sheringham, Cromer and Wells next the Sea, the steets are crawling with them yapping and fighting

I don't know about an increase in biting incidents but here in leafy Muswell Hill in North London the "dog turd on pavement" count has increased exponentially. Not that I'm an expert, you understand, but it seems to me that the majority of (canine) culprits are the mini-breeds although the larger breeds still contribute mightily to the sh*tfest.

As occurred before C-19, drawing the attention of an owner/walker to his/her pet's unremoved canine offering usually results in a blast of obscene and threatening invective. Nice!

Might be a good case for all dog owners to have compulsory insurance, I have a quite older boarder collie but I still fork out for 2 million pounds insurance just in case.

"Might be a good case for all dog owners to have compulsory insurance..."

And we all know which section of society wouldn't bother...