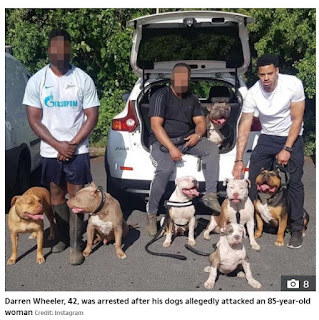 This is the man - if 'man' is even the right species -  who owned the two vicious beasts that mauled an 85 year old woman to death in her own back garden.

Locals believe he breeds the puppies which can fetch up to £6,000 each, studding out his beasts as “trophy dogs”.

I guess we'll have to hope HMRC take an interest then, since they clearly have bigger teeth and are more up for a scrap than the West Midlands Police...

An image that only lacks plod taking the knee with this bunch, reflects the current level of police 'service' in the UK.

Just be very, very careful if you are white and driving a car at 1 mph over the limit.

Imagine if the owners were a whiter shade of pale, the R word would no doubt be spreading about with gay abandon

Didn't we all know the suspect would look like this? Unfortunately for him the poor victim is black as well so he can't play top trumps with the race card on this one.
Jaded

Is he paying tax on those £6k payments. HMRC is better at getting him than plod. Auditing his affairs over the past ten years will be like a proctoscopy without sedatives.

"An image that only lacks plod taking the knee with this bunch..."

"Didn't we all know the suspect would look like this?"

I had an inkling.

" Auditing his affairs over the past ten years will be like a proctoscopy without sedatives."

Sadly, they too are likely to refuse to touch this one with the proverbial bargepole.