A Quick Perusal Of Her Social Media Would Have Clued You In...

A social worker has been struck off for sending sexual selfies to a teenage boy in her car and telling him that she was in love.

Georgia Thomas, 26, from Swansea, South Wales, engaged in 'sexual activity' with the 15-year-old boy in her care and sent him a string of sexual text messages.

What? A social worker? One of those grey people in sensible shoes and cardigans? What attraction could they possibly have to a fif... 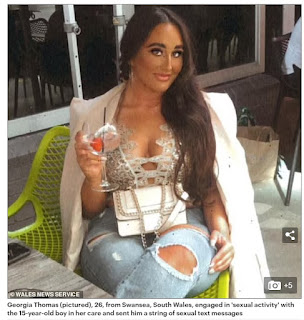 The disciplinary panel heard the breaches took place in August to October 2018 while working as a child care worker for the Athena Group in Swansea.

Miss Thomas did not attend the hearing held via Zoom but the panel concluded her behaviour was 'dishonest and lacked integrity' and her fitness to practise was impaired.

A bit more due diligance would perhaps have ensured she wasn't hired in the first place...but no doubt someone thought she was the idea role model for a teenage boy or girl.

She was handed a removal order banning her from working in social care in Wales.

And he turned her in?

Possibly, he is gay.

Or, he has some taste.

I thought that 15 was underage and would have expected some action from Plod.

Clearly I'm behind the times.

But had he impregnated her he would (eventually) be liable for child maintenance payments.

"I . . would have expected some action from Plod"
Maybe she's moved to Rotherham or Rochdale . . .

It would have been the answer to a prayer from a 15 yr-old me.

If the lad was fifteen, I guess she didn't get it all her own way...

Let's hope it's the latter!

I know the cliche, but, well, really?

It's amazing we're campaigning for less plastic in our groceries but not... well, you get the picture!

"I thought that 15 was underage and would have expected some action from Plod."

"If the lad was fifteen, I guess she didn't get it all her own way..."

Ah, but the stamina of youth?