Racism - It's Not Just Something Done To Black People, Afua...

A few days ago, approximately one hour before I was due to give a keynote speech to a large public sector organisation, I received some last-minute instructions. Please refrain from using controversial or politicised language, the network of black staff who had invited me in asked. They were genuinely scared that I would get them into trouble and draw “unwanted negative attention to the detriment of our members”. The offending phrases they feared I might use included “white privilege”, “critical race theory” and – the absolute killer – “Black Lives Matter”.

Good. They clearly showed more sense than you. To Afua, of course, this was another excuse for OUTRAGE!

As the level of consciousness about how racism can be inflicted upon black people grows – and I think in the past year it has – I find myself noticing more and more that we have internalised a system of racism in our anticipation of how white people will respond to our blackness.

Yes, in Afua's mind, racism is never something black people do to other ra... 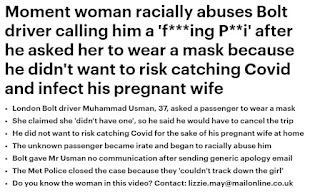 This week, for example, a black art curator I follow on Instagram posted that, in all instances where she is the only black person at the table, she must be paid more than her counterparts.

“I consider this to be a tax for the violence of isolation, and the additional educational labour that I have to do,” she explained.

So you follow only chippy racists and grifters, Afua?

This month I was targeted in the rightwing press for having the audacity to accept an invitation to speak with the Home Office. Since this government department has by its own admission failed monumentally in its treatment of black British people, I thought speaking about anti-racism might be helpful. Apparently it was in fact “a hostile tirade”.

"Yes, in Afua's mind, racism is never something black people do to other races"

Well yes of course, if you showed her that clip she'd explain that it was all the fault of colonialism artificially creating racial tension between different races as a divide and rule tactic and thus it would (of course) be the white man's fault, as everything always is........

"...if you showed her that clip she'd explain that it was all the fault of colonialism..."

Undoubtedly! It's done so much good, hasn't it? Civilised the Third World AND given activists a permanent excuse...