No, Bei, It's Working For The Children It's Intended To Work For... 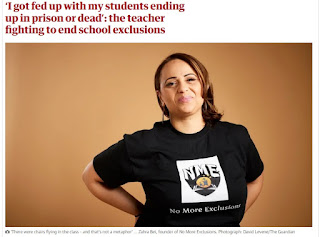 Bei had come to London alone at the age of 16, leaving her Somali-born mother at home in Italy. She went to college, studied for a BTec, got herself into university, then did a PGCE and started teaching.

The job was demanding, the hours were long and Bei was also raising a young son...

No mention of the father, then..? Wow, what a catch, Britain, eh? Italy's gain is surely our loss here.

Schools in England have increasingly adopted so-called zero-tolerance policies, where breaches of the school’s behavioural code can result in children being taken out of class and put in a separate area where they work alone, in silence, away from their peers. Critics say isolation can be damaging, not only for a child’s education but also their emotional wellbeing.

And of course, Bei lapped up the advice of these 'experts', and began to focus on them, and not on those poor little souls in her classroom just trying to learn...

...for Bei her school was starting to seem more like a corporation, rather than the community one she’d joined. “You just feel like, well, this is not what I signed up for. And I remember that I gave in my notice overnight, without another job to go to.”

Decision making isn't a skill she has a lot of, is it?

She joined a Pupil Referral Unit so she could coddle the troublemakers even more, though not for long:

There was a restructuring at the PRU and Bei left to study for a master’s in social justice and education at the Institute of Education at University College London. She has been fighting racism and social injustice in education ever since.

Well, I suppose we can't expect Border Force to stop criminals coming into the country, so it'd be a stretch to expect them to halt potential fifth columnists at the border.

“What we have got at the moment is not working. Can we at least agree it does not work?”

Could this have anything to do with repaying student loans? A degree, PGCE, then a masters can't have been free.

So this is in London, on of the most left wing places in the country

The London that is much more on board with the Social Justice schtick than say anywhere Red Wall-ish (aka not London).

And this is the profession that overwhelmingly votes Labour.

but racism in Education - right.

Silly me - they just need to double the money in education every year until nirvana comes. 'Cos it will right.

"A Masters in social justice". Bloody hell what an utter waste of synapses. I'm glad the taxpayer doesn't fund this any more.

Note too the weasel phrasing: she pretends to be talking about black kids, but she uses figures for Black Caribbean kids and only these kids. Either there are the world's most selective white supremacists at work, or it's about culture not race. Maybe kids from Ghana manage to avoid all this supposed discrimination by not regarding scum like Raheem Sterling as role models?

Studying for a master's in Social Justice?

Why the study? Surely that's the one degree that should just be given out for free.

"Could this have anything to do with repaying student loans? "

Hmmm, possible! Never going to repay it any other way. Like hard work.

"Silly me - they just need to double the money in education every year until nirvana comes. 'Cos it will right."

"Bloody hell what an utter waste of synapses."

"Either there are the world's most selective white supremacists at work, or it's about culture not race."

Spot on! It's ALWAYS culture.

"Why the study? Surely that's the one degree that should just be given out for free."

In the toilets. In roll format. 😏