His Own Mother Couldn't Recognise Him From That...

British Transport Police have released an image of the man who is wanted in connection with two assaults that happened on the London Underground today. The man was first seen assaulting another man at Baker Street Station around 11.50am.He was then seen shortly after midday at Finchley Road station where he pushed another man onto the tracks.

Neither of the victims were seriously injured from the attacks. Detectives believe the suspect was not known to either victim. 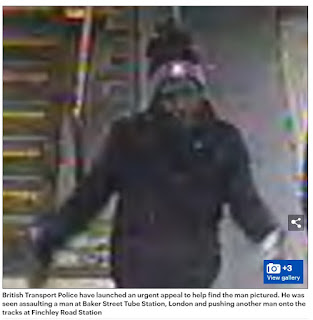 What was it filmed on, a potato?

Detective Inspector Paul Watts, said: 'If you see someone matching this image...'

If I see someone 'matching this image', it'll be because my glasses have steamed up, Paul...