The 'Mail' Yearns For The Smack Of Firm Government... 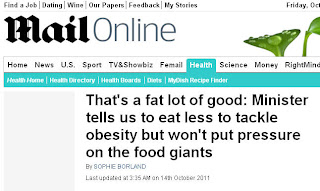 How are the ‘food giants’ responsible for what YOU put in YOUR mouth, Sophie? Do they come round and force-feed you?

… bizarrely, on the same day the public was urged to eat less, a group of Government scientists announced an increase in the recommended daily calorie limit for those who are not overweight.

Yeeeees, I think the key part of that phrase is ‘for those who are not overweight’. Bit of a clue, eh?

Naturally, the usual suspects are in just as high dudgeon as the ‘Mail’ columnist:

Charlie Powell of the Children’s Food Campaign said: ‘This is a deeply disappointing and utterly inadequate response which represents a squandered opportunity to address the UK’s obesity crisis.

‘It is nothing less than an abdication of the Government’s responsibility to protect public health.’

Which, as far as I can see, they do. I can buy food and drink in the supermarket with reasonable confidence that it won’t kill me through dangerous additives or unhealthy hygiene standards.

That responsibility does not, however, extend to a government restriction on how much of it I then choose to consume at a sitting. And nor should it.

A spokesman for the British Medical Association said: ‘We do not feel the strategy has gone far enough. It will take more than industry self-regulation and personal responsibility to reduce the obesity crisis.

So, what will it take? Totalitarianism?

And where’s everyone’s favourite cheeky Cockney chappie? Oh, there he is:

‘Simply telling people what they already know – that they need to eat less and move more – is a complete cop-out.’

A TV CHEF IS UNHAPPY WITH THE GOVERNMENT! THIS IS A DISASTER OF UNIMAGINABLE PROPORTIONS!
Posted by JuliaM at 13:30

Government has a role in ensuring that food is adequately labelled, and that health and hygiene requirements are met in production.

Other than that they are hardly the people to give moral guidance.

An excuse for more taxes I think.Petrol revenues are down massively since they have been lecturing us on gas guzzlers and climate change.The shortfall has to be made up.
Jaded

All those nosy busybodies are going to be out of work soon. As they have already inveigled governments to pass big brother laws and regulations that have turned society and the economy into a total mess. The end result is going to be austerity and austerity on a grand scale. After WWII Britain was in the grip of austerity where bread and dripping, spam and corned beef were considered a luxury but there was no obesity.

The problem is that the gvt advice "eat less, move more" doesn´t work.

A 'crisis' is something that has to be dealt with quickly, one way or another like the threat of a nuclear attack by a rogue state. Either we dig shelters, or bomb them before they bomb us, or we gamble on them not doing it or something, but the decision has to be made within a short time period.

Some people being too fat is not a crisis, we could "do something about it" this year, or in ten years or simply never bother, seeing as they will all die a horrible death in the next couple of years, allegedly, it's not going to make much difference.

"cheeky MOCKNEY chappie? Oh, there he is:
Jamie Oliver"

Edited for reasons of racial profiling.

-if he was from the East End then his surname would be 'Singh' or 'Patell' not 'Oliver'.

If the medical establishment bothered to do any genuine research, instead of parroting whatever the fashionable neo-puritan line is this week, it might find that there are some genuine puzzles about the cause of obesity.

Too much to hope for, of course.

PS The cause of obesity is fat feckers eating too much, not the amount of fat/sugar/salt/alcohol/tobacco there is in a burger.

Well not strictly speaking wrong, EV, but since his eventual passing is inevitable, perhaps a little prosaic and unimaginative.

Why do I get the feeling that those who want the government to start legislating and banning stuff for fat people are themselves thin?

It's funny, isn't it, the human condition. We spend years fighting discrimination on the basis of race, religion, sexual orientation etc, and as fast as those prejudices are stamped out, new ones spring up in their place.

Now it's smokers, drinkers and fat people. What is it with people, that they have to have something/someone to disparage? It seems to be a necessary part of the human psyche...

Well said, nisakiman. And it's a very common sentiment expressed on blogs where people like to parade their 'libertarian' credentials and sensibilities - which tells us how deep those beliefs sometimes are.

The Mail is a despicable publication. it makes these certain "right wing noises" as a kind of smokescreen for its constant lobbying for more nanny state, more legislation, for interventions and prohibitions.

In a sense, I prefer the likes of the Guardian, which is at least honest about what it is. The DM with its faux "conservative" stance, does far more harm.

"PS The cause of obesity is fat feckers eating too much, not the amount of fat/sugar/salt/alcohol/tobacco there is in a burger."

That says it all. It is not ours or anybodies business what we do or not do as long as we abide with minimalist laws that allow society to function for our mutual benefit. At the end of the day we all have to be responsible for our own actions. If we are not then we get what we have now every outraged interfering busybody looking over your shoulder criticizer and telling you what to do. The only ones enjoying themselves in today's society is them.

Just make up the weight with extra olive oil.

Jamie Oliver? Isn't he one of those characters on TV who salivates over food they make and say things like, "oooh, this is soooo delicious, you should try this at home."

And all the while slack-jawed peasants sit watching it at home (in full colour) and salivate too.

Nope, the whole TV chef thing is a farce and then they then have the gall to try and make intelligent statements.

"A TV CHEF IS UNHAPPY WITH THE GOVERNMENT! THIS IS A DISASTER OF UNIMAGINABLE PROPORTIONS! " ...

This would appear to be the ultimate verification if any were needed that we were put on this Earth to be fattened as cattle.

The aliens have decided that their customers require a leaner cut of meat, and that smoking gives the meat a funny taste...

"Other than that they are hardly the people to give moral guidance."

Quite. Especially when they can repair to their smoking-enabled, subsidised restaurant!

"An excuse for more taxes I think."

Oh, that's undoubtedly part of it.

"All those nosy busybodies are going to be out of work soon."

I'd like to think so, but I really see no signs of that happening yet...

"The problem is that the gvt advice "eat less, move more" doesn´t work."

It always has for me, and for colleagues. Those who put their faith in faddy diets, not so much...

"Why do I get the feeling that those who want the government to start legislating and banning stuff for fat people are themselves thin? "

Not always - this 'advice' is often dished out by nurses and health workers the approximate size of minibuses.

"In a sense, I prefer the likes of the Guardian, which is at least honest about what it is."

Possibly. But it is, really, deep down, that honest?

"This would appear to be the ultimate verification if any were needed that we were put on this Earth to be fattened as cattle."

Well of course part of the problem could be solved if Joe Public could afford to eat on a regular basis at the likes of restaurants run by people like Jamie Oliver,the trend back towards "nouvelle cuisine" ie lots of decoration round the edge of the plate and Lego building of the remaining ever decreasing ingredients in the middle would certainly help.
A famous french chef was asked years ago ,what was good about nouvelle cuisine,his reply was ,"the bottom line" i think that sums up celebrity chefs.
As for the government involving itself,go away.

Not that civilian opinions matter much to me but is my newly installed spellcheck making an impression on you lot?