The Tyranny Of The Breeders…

Kirsty Desire-Delannoy and her husband Mark had only moved into a house opposite Greene for a month before she started being abusive to their five-year-old son.

Mrs Bryan said: "On May 29, their son was playing out with another child and Greene took exception to where they were playing and asked them to move on.

"The boy's mum explained she wanted them to play directly outside the front of her house to keep an eye on him as he is only five."

What’s wrong with your garden, then? Or taking him to a local park?

Is Jipdane, Orchard Park, some sort of urban hellhole without gardens or parks? Let's see: 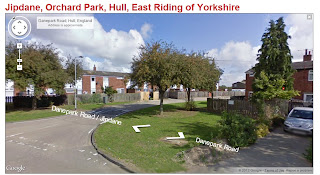 Hmm, looks like plenty of little gardens there to keep your children safe in...


She was bound over to keep the peace for 12 months but just three days after appearing in court she again had a confrontation with the children.

The children were again playing outside their home when she allegedly swore and shouted at them and asked their parents what they had "bred".

Doesn't she realise that one must never, ever, ever imply (by word, deed, thought or omission of same) that children are anything other than an unalloyed delight? The saviours of our future? No matter how they are behaving? It’s the re-education camps for you, Mrs Greene!

And we know just the people that’ll deliver you there!


Officers were called and Greene was handcuffed and put into the back of a police van before being driven to a police station, where she spent a night in a cell. A nurse had to return to the pensioner's home to collect her numerous medications, the court was told.

Oh, for….! Try getting the police to come out for some spitting, swearing yob that’s lounging outside your front gate! You’ll be told ‘ We've no resources…’.


The Honorary Recorder of Hull and the East Riding, Judge Michael Mettyear, said a "sensible" conclusion to the case was a restraining order. He said: "She is just a lonely old lady who is confused and making a bit of a nuisance."

I don’t see where the ‘confusion’ comes in, frankly, unless it’s her failure to accept the modern doctrine of ‘Children should be seen and heard at the top of their lungs and don’t you dare say anything about it!’…

As for causing a nuisance, well, it takes two to tango, doesn't it?


"None of the neighbours want blood in this case. They want nothing more than a bit of peace.

"They say this lady misbehaves and is loud and boisterous and a nuisance. It empowers me to make a restraining order. "

Maybe Mrs Greene ‘wants a bit of peace’ too? Maybe the children are the ones that are ‘loud and boisterous and a nuisance’?


Speaking to the Mail after yesterday's case, Greene, who survived the Hull Blitz during the Second World War, said: "I never bothered anyone. It has all been a waste of taxpayers' money.

"The police just threw me in the van and the cuffs hurt my wrists.

"I can't believe I was treated like this at my age. I have never been so miserable.

"I just want a nice cup of tea and a roast pork sandwich now."

Oh, now you've done it, Mrs Greene! Couldn't you have plumped for a cheese sandwich? Your neighbours might be Muslims…
Posted by JuliaM at 10:55

XX Greene, who survived the Hull Blitz during the Second World War, XX

Julia, how could you be so cruel as to suggest that this frail old lady eats a food stuff which contains apparently lethal levels of salt?

Disgraceful way to treat an old lady, but I expect no less from plod and no doubt Jaded thinks it's fine and he has somehow 'protected' me.

So what if she is cantankerous? That's a crime now, is it?

How these tossers sleep at night I'll never know.

Noggin-you're an idiot.What has this story got to do with me? I don't work in Hull.But of course in your warped mind all police are the same.
Read some of the comments instead of just the "Daily Mailesque headlines".I know what a long and difficult process getting an ASBO served on someone is.Not just for one incident.
Quick mention Tomlinson again,it's about time.

You ARE all the same, you've proved it time and time again. You defend the indefensible, you support dictators, liars and thieves, with violence.

The reason you pricks get away with it time and time again is because people fear your 'authority', your uniform, your weapons.

I don't fear you, and you'd have a shock if we ever met. I've met armed men before, and it didn't turn out well.

You disgust me. Your groupthink, your moral uncertainty, your willingness to obey, your haughty, arrogant spirit. Your highhandedness, your total belief that you are right because the 'law' says so.

Put your whistle and your taser down, and we'll see whose a proper chap.

Oh dear,an idiot off the internet doesn't agree with me.How will I cope?
Never mind Noggin.It's easy to make threats and be brave behind your keyboard.We can all do it and no-one's impressed.

We all have a role in society. Even you serve some purpose, Jaded.

Perhaps you found your niche by gravitating to the dumbest and most aggravating procedures that police services have managed to devise.

You see, wasteful and expensive absurdities demand ever greater efficiency from the most productive humans; which may be nothing more complex than a gene-driven necessity.

Don't let the bastards grind you down.

".. how could you be so cruel as to suggest that this frail old lady eats a food stuff which contains apparently lethal levels of salt?"

It's what makes it so delicious! ;)

"Read some of the comments instead of just the "Daily Mailesque headlines".I know what a long and difficult process getting an ASBO served on someone is.Not just for one incident."

Well, indeed. But if she's committed other 'crimes', you'd think the newspaper would have printed them, no?

Julia,if you pop her name into the Hull paper alone it throws up nine stories of her tomfoolery.But that would almost be research and not fit this anti police story.
Asbos are never issued after one complaint.