Oh, Do Please Lecture Us Some More, Anna Soubry...

Anna Soubry, the defence minister who is tipped for promotion, said that immigrants come to Britain "overwhelmingly to work, they do not come here to scrounge".

She said that there are far fewer immigrants claiming benefits than people who are born in this country, adding that they play a "hugely important" role. She said that in her constituency in Broxtowe, Nottinghamshire, she tries to argue the case for immigrants when met with concerned voters.

She told BBC One's Andrew Marr show: "When you make the case with people who come and see me in my constituency surgery who say I'm really worried about immigration. You say really, why? This is Broxtowe. We don't have a problem with with immigrants."

You can just imagine the tone of voice the patronising cow uses, too, can't you?


"When you explain that to them they get it. Not all of it. Some people have prejudices, some people are frankly racist, but there are many who just don't know the argument."

Really? How surprising. I'd have thought there were a lot of people who are indeed familiar with the argument, and sick & tired of reading about people like Hasan Fidan.


Fidan, who is unemployed, said he had been living in Britain since 2006.

But not a scrounger, eh, Anna? More of a hunter-gatherer, I suppose you'd claim? 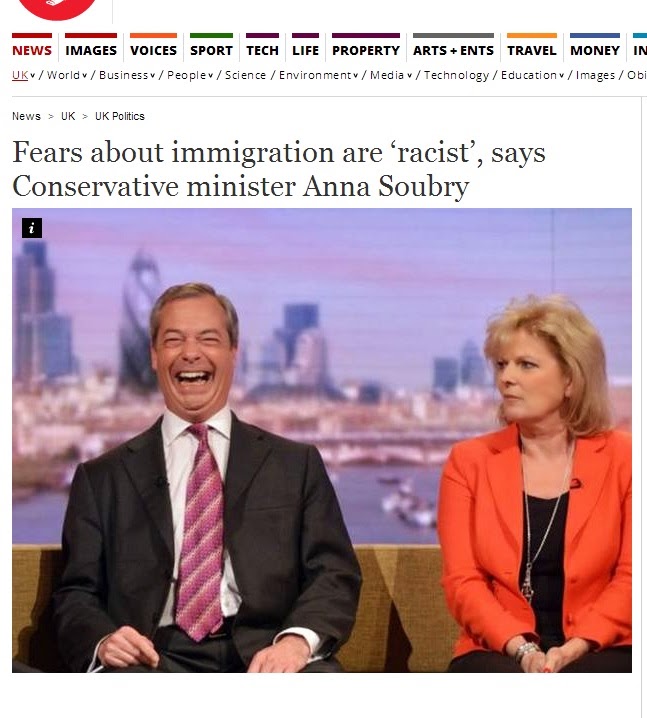 A stereo-typical LibLabCon MP, stuck up, arrogant, condescending. knows better than the electorate and RIGHT! Honest!

Thing is, like every pro-immigration Tory (and middle class PC "wimmin"), she KNOWS they'll not be moving in next to her.

The thing is, the sheeple have the power to do something about thieving fuckers like her but they won't, those that vote will stick to their usual and there's still 60% who couldn't be arsed to vote.

Helmer should walk it in Newark but he won't, they'll give the all expenses paid job to a proven liar who has never had a proper job in his short, useless life.

Apathy is the enemy of democracy

You see, Madame Soubry, some British people are fearful of losing their racial and cultural identity in an ever-swelling sea of alien immigrants (working or not).

Please forgive them their uncouth ways.

XX far fewer immigrants claiming benefits than people who are born in this country,XX

Because, at least up to now, the people born there out number immigrants?

The stupid bitch carefully does not mention "per head of equivalent population" I notice.

I lived in Broxtowe as a kid, its not immigrants she needs to worry about, it's having the skin stolen off your back by the thieving locals.... Broxtowe makes The Chatsworth Estate in Shameless look like Wisteria Lane.... having got my get out of jail card some years ago, good ole Anna is welcome to them....

Sickening to hear a Tory talking like this.Never again will I vote for them.
Jaded

Killing and eating a swan! That all.

A Muslim lunatic has just been convicted of murdering his disabled mother-law in the most evil way imaginable.

I cannot bear to go into the details but those with a very very strong stomach should look at Thisislondon.

I live near Broxtrowe and I think Anna needs to look around, the Broxtrowe area is not too bad YET but we moved from Radford less than 1/2 a mile down the road.
We were effectively forced out the entire area is Muslim and it's a shit tip 90% of them are on the dole there so shes delusional.

Unless the people of Broxtowe are stupid Anna will be out of a job next year and good riddance.

I have to tell you Disenfranchised that in Radford the majority are 1st generation and rarely even speak English.
We would walk down the road there and never hear an English voice ever.
Not to mention the plethora of Mosques and dress up Friday,and the fact that 99% of faces were all covered it was hard to tell who was who most of the time, the parking on ALL available pavement so you could not enter your own home without intimidation. Hence why we moved. I agree with you about the 2nd and 3rd Generation thing.

Kath:
Must be me but I have no problem;
Just have a few large hairy pals round on the Harleys and tell them to get out of the f$%^"ng way before we kick your f$%^&ng head in.
Perhaps a subtlety in the translation :)

"Helmer should walk it in Newark but he won't..."

"Unless the people of Broxtowe are stupid Anna will be out of a job next year..."

Wow just watched her on QT... What a haughty sour faced piece of work

Ones and Zeros on the Interweb said...

Just listening to the condescending bitch on Any Questions nearly twom years after this thread. She hasn't changed. I found this web page by googling Anna Soubrey - haughty bitch.... I found there were over 800 pages....

Good woman Anna Soubry, you’re clearly on the ball when you’re irritating all these nutty nationalists so much 😂. Britain stole the wealth from these countries which gives it such a privileged position today but doesn’t want to face up to the cost it now has to pay