And The Public Drubbing For The Police Continues...

The popular press has swing firmly behind the family: 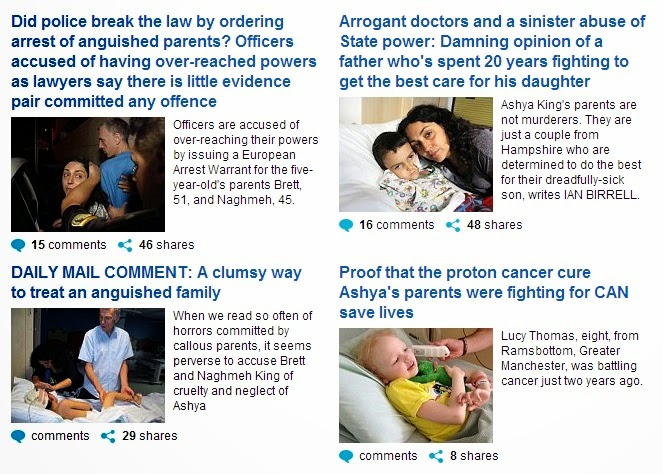 And in the 'Guardian', devastating legal questions the police will find hard to answer:


There is no doubt that Hampshire police were put under significant pressure from Southampton hospital to effect the return of this child. Exactly what the hospital told the police regarding the imperatives of his return maybe revealed as time goes on, but they clearly interpreted their duty to act expeditiously as an enforcement arm of medical opinion. This is not their role.

Time pressures granted, the swift adoption of medical instructions and the setting in train of a series of actions, press releases and media comment placed the family in the position of wanted criminals, their faces and that of Ashya posted internationally for millions to see. The police are there to protect citizens and the easy transition to uncritical enforcers of other powerful interest groups is troubling.

And it's producing strange bedfellows:


The doctors may indeed be right about the treatment, and Brett King has clashed with them before. He has spoken of arguing with them and being threatened with a protection order. These parents may be mistaken. Being mistaken is human, what appears utterly inhuman is the powerful combination of the medical system with its certain arrogance and the ridiculous siren–blazing police efforts. The police have defended themselves saying that a child’s life is in danger. Indeed it is, the child is terminally ill.

Lately the police have been heavily criticised for doing so little to protect children amid all the abuse scandals; here they have gone into overdrive. It would be OK if they too admitted some human frailty, but no: now extradition proceedings and expensive lawyers are involved.

It's not often I can agree with Suzanne Moore. Is it?
Posted by JuliaM at 09:00

Email ThisBlogThis!Share to TwitterShare to FacebookShare to Pinterest
Labels: hoist by their own petard, NHS, police out of control, the State is not your friend

I was under the impression Suzanne Moore was agreeing with you, Julia.

I've agreed with both Suzanne Moore and Owen Jones in the last couple of days. Will the shame ever wash off?

The common feature between Rotherham and Southampton is that all senior police officers seem to have had their powers of good judgement surgically removed. Is it a 'benefit' of promotion to high rank in Babylon?

Nick Clegg also deserves a serious roasting. How does he justify the European Arrest Warrant, that he repeatedly endorsed in the Farage debates as our protection against terrorism, being used against the King family?

I have placed this elsewhere also.

(Woman on a Raft)

Not a legal point but Hampshire police were so keen to use their missing child media alert system that they have arguably not complied with their own conditions:

"There are four key criteria to be met before an Alert is issued, namely:

A child under the age of 16 yrs old is missing
A senior police officer (of at least Superintendent rank) feels that serious harm OR death may occur to the child
The child has been kidnapped and…
The case has sufficient descriptive details (or CCTV/photos) of the victim or offender, to justify launching an Alert."

Conditions (ii) is only met if the police thought that the parents were withholding treatment. The tosh about the battery was just for credulous journalists. A two minute interview with the doctor from a competent questioner would have shown that the real argument was that the parents wanted to obtain treatment which the hospital was unwilling to fund. That’s all. A political argument about funding cancer treatment. None of the business of the police.

Condition (iii) is also not the case. The parents did not require the consent of the doctors. It is a hospital, not a prison. Although the Karen Matthews case showed that you can abduct your own child, this had not happened. They had simply removed a child against the advice of doctors. As they were entitled to do

“Feeling” that there is a risk is not the same as there objectively being a risk, based on rational assessment of the conditions. “Feeling” is precisely what has caused this unholy mess. We want bit of thinking here. The CPO and the doctors are both going to have to wind their neck in and the sooner they make their minds up to it, the better. Southampton cannot possibly continue to offer the child care since nobody trusts them further than they can throw them. The police are going to have to admit they should never have raised the EAW and were just showing off in a revolting display of dick-waving which has achieved nothing but the incarceration in isolation of a dying infant. System abuse, that is.

Do feel free to point out this link. I am limited as to access at the moment.

I bet there are more than a few among the political scum who infest this country who are glad that this has put the stories of the Rotherhan rape-apes and the jihadist shit going to Iraq on the back pages.

flippin' 'eck - I've just agreed with Nick Clegg in the Guardian. Gotta go lay down with a wet flannel on my head.

It is looking bad for May - she has been told time and time again that the EAW was a disaster waiting to be misused, for which she would catch the blame, and here it is.

An opportunistic moment for the 100,000+ folk who were angrily shocked by these events, to collaborate in forming a new Constitution, the draft of which to be placed in cyberspace. A Constitution which will detail the rights of individual citizens and define police boundaries and limit State intervention in our lives.

The right to self-determination in a free state, possibly a renamed State.

Such upheaval inevitably involving the suspension of the present Parliament and emergency control assigned temporarily to an elected Executive.

Finally a victory for commonsense. Justice and mercy for the family and also a result for you, Julia.

Now we must tolerate that sickening display from politicians, gathering at the carcass of this kill, stealing what credit they can whilst pecking rivals' eyes.

LL Exactly what the hospital told the police regarding the imperatives of his return maybe revealed as time goes on, but they clearly interpreted their duty to act expeditiously as an enforcement arm of medical opinion. This is not their role.LL

YES! It IS, actualy;

places a duty on local authorities and their partners (including the police, health service providers and the youth justice system) to co-operate in promoting the well being of children and young people and to make arrangements to safeguard and promote the welfare of children. HH

FT you are wasting your time quoting the law,the twitterati have decided they know best.
Jaded
PS Rotherham.

"I've agreed with both Suzanne Moore and Owen Jones in the last couple of days. Will the shame ever wash off?"

"“Feeling” that there is a risk is not the same as there objectively being a risk, based on rational assessment of the conditions."