The rider, who wished to remain anonymous, later told the Standard the driver had not in fact been on the phone.


But he added: "I'll quite often raise my phone and film phone drivers when I'm out walking. It's a deadly scourge."

Gosh. I don't know why we get this idea that cycling advocates are unhinged cretins, do you? 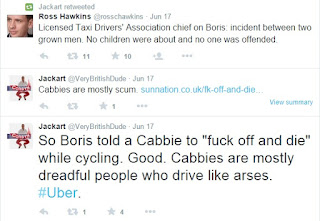