A Derby mum says she has been left heartbroken after her former family dog was put to sleep weeks after it was re-homed by a charity.

Oh boy! Is there a whiff of compo in the air?

That was because she had recently had a baby and was worried about behavioural problems the dog had.

Nice of you to let some other family take the chance with the animal, love!


The 33-year-old claims she was told Brooke had attacked a carrier bag that a member of the public had been carrying in the street.


Thelina, who has three children (Ed: two are called Breanna and Meah-J, apparently...), said Brooke was a "brilliant dog".

She said: "I had two children grow up around her and she was fine with them.

"She was always the type of dog that she would attack carrier bags or if she heard a noise she would bark but she was not an aggressive dog.

"When I had my baby she started barking when she cried. I thought it would be the best thing to do to have Brooke rehomed. I rang the charity and they didn't say anything about putting dogs down."

What, you thought they'd live forever? The charity was no doubt mindful of the ticking time bomb they'd been left with, and acted appropriately.


A spokesperson from the charity said that the decision to put Brooke to sleep was as a result of her "deteriorating health" and claimed that Thelina had not been in touch.

The spokesperson said: "Brooke's previous owners were contacted by a volunteer of the rescue in order to inform them that due to Brooks deteriorating health, which in the opinion of her veterinary surgeon related to a neurological condition, that her life was not sustainable.

"As the previous owners had not been in contact to enquire about Brooke's welfare, the volunteer took it upon themselves to contact them to try to alleviate the conscience and their rationale for her re-homing due to the dog’s reaction to their new born child.

"Apart from the initial first few days with letting them know the dog had settled, there had been no further enquiries from the previous owner."

If there was any lingering doubt about what sort of people we were dealing with here, it's removed in the comments: 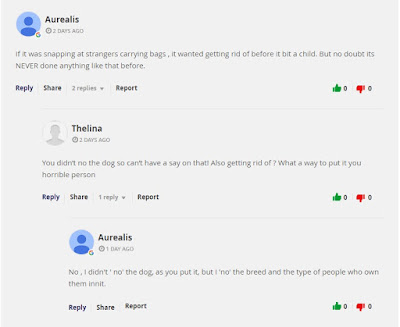 Thelina, who has three children (Ed: two are called Breanna and Meah-J, apparently...)