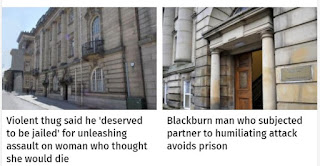 District Judge John McGarva described it as a very unpleasant incident which had lasted most of the day. “Extensive violence was used and she must have been terrified,” he said. “You humiliated her by trying to urinate on her, you tried to control her by taking her phone and she thought you were going to strangle her.”

Gareth Price, defending, said his client recognised that the aggravating factors pushed the matter over the custody threshold. “To his credit he has pleaded guilty at the earliest opportunity, he has no previous convictions and he is in full-time employment,” said Mr Price. “The author of the pre-sentence report says this man can be managed in the community.”

Just because he can, doesn't mean he should...

Doesn't sound like Dean Alex Evans has much to worry about, then....
Oh, wait!

Jailing Evans, who pleaded guilty to one count of assault occasioning actual bodily harm at an earlier hearing, for 14 months, Judge Graham Knowles QC said: “The striking thing is that you have come here and through council, you say you are about to get what you deserve. Not so many people say that.

“Mr Heyworth tells me that’s what you say and you have spoken of your shame in having hit a woman. You accept you should pay the price. Your real mitigation is your guilty plea.”

What a pity for him he didn't have the benefit of an Eastern European name...

Email ThisBlogThis!Share to TwitterShare to FacebookShare to Pinterest
Labels: justice system, one law for all, wtaf?