I'm Not Sure This'll Work, I'm Pretty Sure Sex Offenders Can Swim... 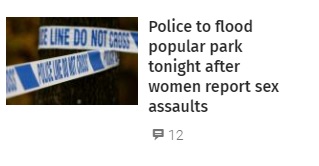 Still, Essex Police will try anything once, I guess.

An 18-year-old woman was assaulted by a man at about 6.55pm last Wednesday. Officers attended the scene and while they were carrying out enquiries, a 20-year-old woman reported she was jogging just outside the park entrance at about 6.35pm when a man tried to grab her but failed.

An Essex Police spokesman said: "We are treating both incidents as linked and have had extra patrols in and around the park.

"We are progressing our investigation and will be in the area tonight to speak to residents and park users to carry out further enquiries."

Wouldn't it have been an idea to just do it and not announce it? In case the sex pest can read?
Posted by JuliaM at 09:00

A chap was driving in Chelmsford when WC Jagged jumped into the road to stop him. A quick search through the back of his truck revealed a group of monkeys. "Why are the monkeys their?" "I have a receipt for the monkeys; they are mine, officer."

The very next day, WC Jagged saw the same fellow in Romford Road. She pulled him over again and was furious when she saw the monkeys were still in the truck, but now wearing sunglasses. "I thought I told you to take these monkeys to the zoo" snapped Jagged.

"I did. Today I'm taking them to Great Notley Park."

I suspect that Essex's finest know (or, at least, consider) that the sex pest can read because I reckon "flooding" the park with policeman is never going to happen. With luck, having read of the putative "flooding" the scrote will avoid the area and go elsewhere (is there another park/open space nearby?). So "job done" for the police at no extra effort besides mouthing the usual crapola.

If the intention is to seem to be doing the job but avoiding the inconvenience of actually catching anyone this is a perfect strategy. After all having to deal with real offenders isn't nice is it?

Before you post these "hilarious" ditties Melvin I think you should get one of the other inmates to proof read them first. You are nowhere near as funny as you think you are.
Jaded

"With luck, having read of the putative "flooding" the scrote will avoid the area and go elsewhere (is there another park/open space nearby?)."

Plenty! And it avoids all the paperwork that ensues if they should actually catch someone.

"After all having to deal with real offenders isn't nice is it?"

Much easier to get stuck in to a nice anti-mask/vaccine protest...

"pretty sure sex offenders can swim"

Not with millstones around their necks they can't.