The Year In Review: Books

This was a year of sequels - the long-awaited sequel to Steven King's 'The Shining' was the standout for me. A dedicated King fan, I was never not going to read it, but the sequel to 'The Talisman' was rather disappointing (at first read), so I approached it with few hopes. And it was a masterpiece.

Also out this year was the sequel to 'A Time To Kill', 'Sycamore Row'. I wasn't as keen on this, but there will - inevitably - be a movie.

And the year I rediscovered an old friend.

*sighs* Yeah, OK, I can wait until you stop laughing! I know, I know. It's become a joke, sometimes for good reason, but, damn it, I wanted to know how it all turned out for Tarl Cabot.

And isn't that the hallmark of a damned good story?

I'm not sure why Norman's 'Gor' novels upset the left so; with their central theme that women crave a strong master who tells them what to do and wear and eat, they really ought to be right up their alley...

He also seems to be the last professor in the US who can actually teach without interjecting his personal agenda, which, as David Thompson reminds us, is rather unique: 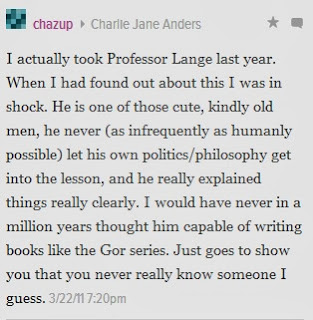 Email ThisBlogThis!Share to TwitterShare to FacebookShare to Pinterest
Labels: literature, year in review

Best book,I, partridge, we need to talk about Alan.

Best blog: frank Davis- banging on about the smoking ban, Today has cracking ban story on cinnamon rolls that aint a ban...everyone is out to get Frank and fuck him up.

Best film recently "La piel que habito" or "the skin i live in"...with subtitles , its slow moving but brilliant so the subtitles aren't a problem.

Gypsy weddings.
come dine with me.
The hotel (torquay)

Although you assert that "women crave a strong master who tells them what to do", I note that despite my attempts at moral correction you've reverted to using unladylike language, such as "isn't that the hallmark of a damned good story?"

Impressionable young women visiting your blog could easily become corrupted by a tirade of filth such as this.

I'm not laughing; greatness is to be found in unexpected places. I've spent part of Christmas reading my first ever Terry Pratchett (bought for a quid from a Catholic church bookstall in North London). It isn't an easy read, but the man's wit and use of language, not to mention the imagination it takes to create a whole world, are really something else.
Pratchett is apparently the author whose works are most stolen from bookshops.

I'd love to see a huge budget, faithful adaption of Gor for the big screen (or even, a TV series come to that, in the tits'n'bums'n'gore "cable" stylee. It'll never happen of course.

Having read the Gor stories for many years, I happened upon a series of books by Sharon Green. In each of these series, the female protagonist enjoys a position of respect and/or authority in her own society, but is forced by circumstance to travel in areas controlled by male-dominated societies in which women have no status. Although possessed of formidable self-defense skills (in Terrillian's case, telepathic abilities), each heroine is practically or actually enslaved and forced to endure rape and other humiliating sexual treatment, during which she often experiences involuntary sexual response. As Green's own site notes "With their very sexual scenes and 'politically incorrect' themes reminiscent of John Norman's famous Gor series, it's unlikely that [these] books would be published today."
I found the writing more interesting and imaginative than Norman's which, in some cases, seemed plodding and repetitive.
My wife read some of the stories, leading to some interesting interludes, as did a few of her friends. Now I can't get the bloody books back!
Penseivat

"...I note that despite my attempts at moral correction you've reverted to using unladylike language..."

And the best thing about discovering an established author is the wealth of novels already written, spread before you like a buffet!

And, to be honest, with so much of CiF's output these days being thinly-disguised clickbait, I wouldn't be too surprised if the 'Guardian' bankrolled a 'Gor' adaptation just for that purpose.

Well, if they had any money...

"...I happened upon a series of books by Sharon Green."

I'm familiar with the name, and yes, she often crops up on fantasy fiction discussion groups. Might try one with my Kindle vouchers.