Who denies the NHS is the wonder of the world?


Primary school pupil Marshall Gearing was stroking the brown Labrador when it suddenly jumped up and sank its jaws into the side of his head.

His right ear was torn so badly it was hanging by a thread of skin and the schoolboy needed two operations to re-attach it. 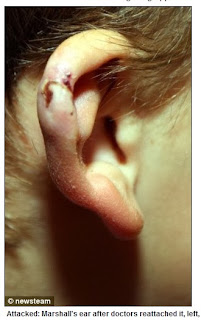 Awesome! If these surgeons made Frankenstein's Monster, he'd look like Brad Pitt!


...is now demanding the teacher’s dog be put down as she claims it is ‘the only way to keep the children safe’, although both the school and police rule the attack to be out of character for the dog.

Hmmm. I wonder just what caused it then? Surely cherubic-faced little chavname was only stroking it...

Not another sodding story about sodding dogs! Never mind the Bulgarians and Romanians, can't we have a few more Koreans who will promise to open restaurants?
Penseivat

Did Marshall Hermann Gearing's older siblings fail to ensure the dog was unable to defend against torments inflicted by the runt?

A textbook example of underclass arithmetic!

Harsh I know, but I tend to generally give more credence to a dogs judgement of a human than vice versa. If a dog thats normally fine takes an apparently irrational dislike to someone I reckon there's probably something totally rational in it. Dogs can spot a wrong'un a mile off.

Have they sown it on the wrong way round?

That ear has never been hanging off!

Have mentioned before that dogs of this type are known for being a bit bitey.

For some reason though guide dogs mauling their owners don't seem to draw the headlines like Stabby McChavs Staffie/pitbull cross peeing against a lamp post or crapping on a neighbours lawn would attract.

Stories like this though raise the question that perhaps Staffie/Pitbulls attacking guidedogs isn't quite as one sided as we're lead to believe.

I am of the opinion that this was an awful accident that could not have been foreseen.

Whereas I'm of the opinion that if you have a dog in a class of potential litigants, the thing to do is to put a muzzle on it. A pity we can't do the same with the children, but there you go.

The child might not have been doing anything naughty but was possibly trying to cuddle the dog and kept pushing his face in to the dog's face. The dog will experience that as a challenge and react unpredictably.

Unfortunately for the poor labrador, it probably looks like a huggy toy.

what does the kids dad have to say about the incident?

That kid got nothing more than a nip on the outer edge of his ear, there's no "two operations" worth of damage there!
For a Labrador to have snapped at him, the kid must have been doing something nastily painful to the dog. The most usual form of 'attack' from a Lab is a severe licking.
The *does the maths* comment is food for thought!

"We have also taken the decision not to allow this particular dog further access to the children in our school."

Well said, Ian Hills. There is no evidence presented to suggest that the kid was obnoxious or had done anything wrong - assumptions of this smack somewhat of snobbery. Even if he did do something "bad" to the dog, it may have been an accident.

Nobody can be sure what goes through the mind of dogs, though they are almost without exception prone to "silly" behaviour on occasion at the very least. They are often observed to be much more pushy around people they don't recognise as "boss" - hence claims that the dog is always placid and well behaved do not necessarily count as much as suggested.

Placing a dog amongst a group of vulnerable strangers (some of whom might not even like dogs) seems like a rash decision and not in the best interests of either the children or the dog.

MTG beat me to it

PS, I can't stand dogs, nasty, yappy unpredictable things they are. Might be highly intelligent and so on, but so was Skynet.

If he learns the guitar, he can have an amp with his name already on it.

Labradors, especially brown labs who are the stupid bastards of the Labrador family, never ever attack anyone. Ergo there must have been extreme provocation. Unlucky lad, or lucky it wasn't a nasty big mutt

"...can't we have a few more Koreans who will promise to open restaurants?"

Hopefully not, I can't stand kimchee!

"A textbook example of underclass arithmetic!"

"...but I tend to generally give more credence to a dogs judgement of a human than vice versa."

They don't have progressive programming to impede their judgement...

"Have mentioned before that dogs of this type are known for being a bit bitey. "

But don't often do the damage. And aren't often owned by chavscum.

"A pity we can't do the same with the children, but there you go. "

It doesn't sound like an admission to me - it sounds like recognition of a lucky escape from the no win no fee brigade!

"There is no evidence presented to suggest that the kid was obnoxious or had done anything wrong..."

Not even the law of averages?