Lots of people were very disappointed with the much-awaited 'Star Wars' prequels, especially the first one, 'The Phantom Menace'.

I rather liked it, myself, though I did wonder where George Lucas got the inspiration for the Gungan race. Especially their leader, Boss Nass: 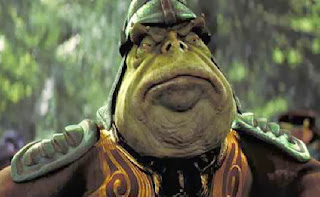 He has inner beauty...

Well, I need wonder no more, thanks to the 'Daily Mail': 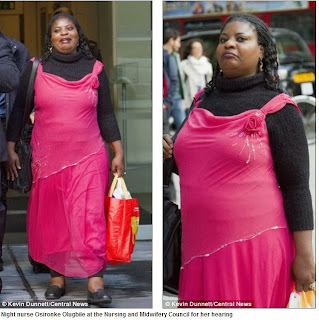 Giving evidence Mr 1 said he was initially worried about making a complaint after Olugbile said she had a friend with supernatural powers.

'I was hesitant to report the issue to management because Ronke (Olugbile's nickname) would often comment that she has someone back home, in Africa, with supernatural powers who will do whatever she says, to the point of killing someone if necessary,' Mr 1 told the hearing.

Email ThisBlogThis!Share to TwitterShare to FacebookShare to Pinterest
Labels: people who ought to be hung up by their thumbs, What the hell is wrong with people?, wtf?

Christ, that's put me off my Sunday roast.

Don't worry, there's plenty more where this particular Jabba The Hut came from - mostly Sarf Eass Lunnun or Little Nigeria as we call it,

Proper response?
Have at it monkey, I have friends a damned sight closer than that!

Taking monkey gland injections to try and stay young looking can result in tragedy, as we can see from these pictures of Denis Healey and Finnish blonde Diane Abbott.

"Christ, that's put me off my Sunday roast."

Yeah, I really should have tagged it 'NSFW'...

"...as we can see from these pictures of Denis Healey and Finnish blonde Diane Abbott."