Det Insp Steve Hambly from Devon and Cornwall Police said: "The dog involved in the incident was put down last Wednesday with the full consent of his owner, having previously been housed by police since the day of the incident."

Det Insp Hambly told Plymouth Live the decision followed discussions with the dog's owner, taking into account a number of factors including the ongoing welfare of the dog and the nature of the investigation.

I suspect that they are preparing the ground to announce she won't be charged.


The dog had been taken into kennels and specialists were examining exactly what breeds of dog were part of its make-up to determine whether it was legal or not.

It was thought the animal was a bulldog, but it has now been confirmed it was a crossbreed.

I wonder if they've tested the other beast she owns?


It was unclear whether checks were carried out on her other dog. 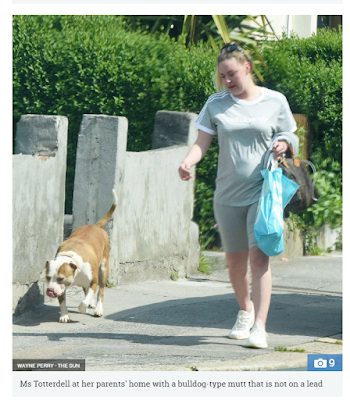 The ugly mutt is the one on the left...

That'll be 'No' then. And not surprisingly, since Devon & Cornwall Police Farce seems not to understand the new DDA:


...because the animal is not a banned breed Devon & Cornwall Police say the matter is out of its hands.

It doesn't have to be a banned breed, you useless, lazy, incompetent filth.

Christ, are they so desperate for police officers down there in Scrumpy Land they hire single digit IQ morons who can't read?


A spokesperson for Devon & Cornwall Police told Devon Live: "This incident didn’t involve a banned breed, owners actions not deemed criminal, therefore this is dog versus dog and our powers essentially stop at voluntarily control orders.

A spokesperson for this blog said: "Melvin's right, you are all useless wastes of oxygen, and I wouldn't stop to assist if I saw any of you getting a kicking."
Posted by JuliaM at 10:30