The Rewilding Enthusiasts Must Be Fuming...

Two female brown bears have been shot and killed at Whipsnade Zoo in Bedfordshire after they escaped from their enclosure when strong winds toppled a tree.

The zoo’s chief curator, Malcolm Fitzpatrick, said in a statement that the tree fell in such a way that it formed a “bridge” between the brown bears’ pen and the fence of the neighbouring wild boar enclosure.

If I had my way, he'd be the ex-chief curator.

This was a totally foreseeable accident; no trees capable of forming such a bridge should they fall should ever be near the inside or outside of an enclosure, and when high winds are forecast (as they were on this day), enclosures should automatically be checked for security.

The two bears crossed into the enclosure, where they attacked a male boar. Fitzpatrick said the zookeepers had no choice but to euthanise the bears over concerns of an “immediate threat to human life”.

“As brown bears are strong and dangerous predators, our first priority is safety – we must quickly make decisions informed by our experience and expertise to protect our people, guests and our other animals,” he said.“No one wants to be the one to make that call, but when there’s an immediate threat to human life, the decision is made for you. ”

There's more than animal lovers who are going to be very, very unhappy about this, though. There's the enthusiasts for 'rewilding', who clearly want to see these 'threats to life' introduced: 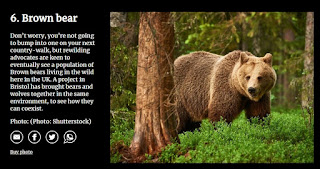 If you go down in the woods today...

“We’ve managed to put a man on the moon, I don’t see why we can’t get wolves back in Scotland,” says Lister. Bears would also learn to specialise in killing deer, he believes, and would be an even more dramatic pull for visitors than wolves.

Maybe not, Mr Lister, maybe not...

There is this modern technique called tranquillisers. Why were they not used? I would have thought a zoo would have access to these tools 24/7 the same as they had access to the firearms necessary for the task.

Why is it so many inept people end up in positions of power?

One must assume that the Zoo's obligations to carry out formal Risk Assessments were conducted by its curator, Patrick Fits Malcolm. It won't be the first time a genuine Irish synapse became a prominent feature of a doomed process.

What was the worst thing the bears could have done?
Eat a wild boar? How many boars can a bear eat? Are bears cheaper than boars?
Why not just change the signs, or signage as we say now, and make boar enclosure the bear enclosure. A single letter change.
Why did they have a large carnivore pen right next to the bacon store?
I suppose the trees are the bears toilet facility
Who gets to keep the bear skins? And the spleen?

Search “black bear New Jersey” to get an idea of how that might go. Note that NJ has a massive overpopulation of deer, and that the ongoing problems are the result of a long-running ban on hunting alone, not an active effort at increasing their population.

"There is this modern technique called tranquillisers. Why were they not used?"

Unlike in tv shows and 'Planet Zoo' the game, they don't work instantly.

"What was the worst thing the bears could have done?"

Attacked some of the guests who were staying in the zoo overnight in their expensive chalets?

"Note that NJ has a massive overpopulation of deer, and that the ongoing problems are the result of a long-running ban on hunting alone, not an active effort at increasing their population."

The Bureau of Land (Mis)Management, I expect...😒