They Must Have Pretty Tame Horror Movies In Pendle…

He said the matter had now been passed to police for an investigation to be carried out.

Very ominous. What is it about swimming that seems to incite aggression and unrest?
So, what actually happened?

It comes after an eyewitness said one of the men grabbed the other by the neck after the pair collided in the designated lane swimming area, at around 2.30pm.

The witness, who asked to remain anonymous, said the man appeared to throw the other swimmer over a rope separating the lanes from the rest of the pool.

He said: “He grabbed the other guy by the neck and started shouting ‘I’m going to kill you’ - it was unbelievable. ”

“There pool was full of schoolchildren and they were so horrified, they were screaming and had to get out.

“It was like something out of a horror movie. I still can’t believe it.”

Really? My horror movies are usually much, much more horrific than that... 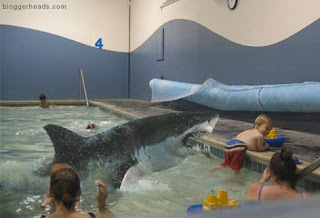 Pendle? Perhaps they are still worried about their witches.