For so long now, this one has been my screensaver on my work PC - Henri Rousseau's 'Tiger in A Tropical Storm': 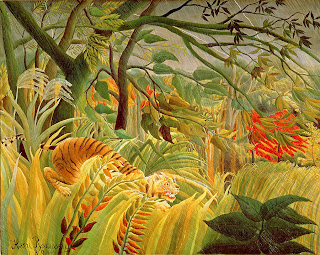 Despite his claims to have been to jungle climes in ... errr, Mexico, not known for its tigers or its lush vegetation, it's believed he painted it from trips to botanical gardens and taxidermy specimens, or woodcuts and pastels by other artists.

I first saw it on a trip to the National Gallery to see an uncle who was giving a guest lecture there - his speciality was Van Gogh (who I've never cared for) and what drew me (after the gorgeous colours which just seem to leap out and smack you in the eye) was the sense of movement he's managed to get into the canvas. The foliage seems to be whipping around in the teeth of a gale.

I must call in next time I'm in London with time to spare and renew my acquaintance with it in the flesh - their website tells me it's still on display.

Next month: Heatherwick
Posted by JuliaM at 13:30

No tigers in Mexico, either.

Very tasty, Julia. Even his childlike depictions are a pure delight. The Art Establishment is obliged to scorn the self-made and he was unfairly treated, as was the great Vettriano until recently.

Patronisation was unintended and my comment is confined to 'Art is good when the Establishment says it is'.