Two mothers brought terror to the playground of a primary school when they became involved in a brawl with another woman in front of children.

Oooh, Yummy Mummy Foxy Boxing! Throw in some mud, and this could be a new trend. 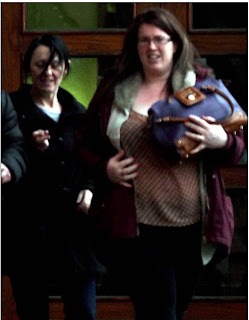 Keep very still, and pray its vision is based on movement...

John Cleasby, prosecuting, said: "This was in broad daylight outside a school with small children in the vicinity.

"It was witnessed by a number of teaching assistants, who were sent out in order to bring the violence to a conclusion.

'In due course the assault stopped and Nyberg and Angus readjusted their hair (Ed: Well, of course! A lady has standards, after all...) and left the scene calmly.'

Before embarking on a scheme to foil the police investigation via Facebook false witness statements...

And why are they always smiling in these outside court snaps?


Nyberg, of Howling Lane, Alnwick, admitted affray and was given a 12 month community order with 60 hours of unpaid work.

Angus, of Windsor Gardens, Alnwick, pleaded guilty to affray and perverting the course of justice and was given six months prison suspended for 12 months with 100 hours of unpaid work.

Mother-of-three Balmbra, also of Windsor Gardens, Alnwick, admitted perverting the course of justice and was given a 12-month community order.

I suppose her sentence was reduced on the grounds that she didn't eat the victim after attacking her.

Alnwick is one of our favourite weekend boltholes - I'll never look at the place in the same light again.

How come Jolene and Carlene (oh yes!!) got off? Is it the sentencing guidelines which insist that a guilty plea acts, more of less, as a species of acquittal? Or is it - as I suspect - just another failure of the justice "system" to deliver justice?