The human mouth is a reservoir of germs – he’d be better off being bitten by a four-legged animal!


Rob, aged 34, explained: “I managed to rugby tackle the guy to the ground and hold him there. “He was trying to throw punches but nothing connected. Then he bit me twice.

“A shop assistant chased him with me. The shoplifter was threatening both of us and when he bit me he screamed ‘ I've got hepatitis’.”

Married dad-of-two Rob, of Rosemary Road, Poole, has since been given the all-clear from doctors.

I thought about this story as I was having one of my perennial Twitter conversations with people that think shoplifting is somehow a lesser crime: 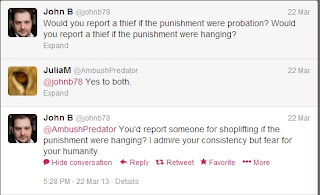 But this just illustrates what appalling scum shoplifters really are. The do-gooders and bleeding hearts fondly imagine it to be kids nicking sweeties for a dare, or desperate single mothers trying to feed their children; in reality, it's organised (often foreign) criminal gangs or scummy drug addicts.


“People can knock me all day long for stepping-in but I’d do it again,” he said.

“We work so hard for the little bit we do get.

“Why should somebody else be able to go into a shop, take something that isn't theirs and think they can get away with it?

I would do what I did again in a heartbeat.”


Anthony Cole, aged 32, from Poole, admitted theft from a shop, ABH and common assault at Bournemouth Magistrates’ Court on Thursday. He was remanded in custody until sentencing at crown court next month.

What's the betting? Druggie? It's almost a no-brainer for an ordinary person, isn't it?
Posted by JuliaM at 09:15

I'd expect nothing less from JohnB.

"A liberal is a conservative who hasn't been mugged yet". Not sure who said that, but it's pertinent.

Well, according to Google, Frank Rizzo.

And he wasn't wrong!