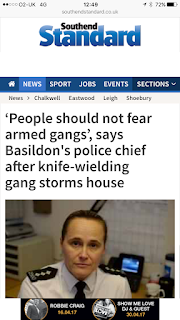 Chief Insp Sam Smith, district commander for Basildon, spoke out after a gang of men - one wielding a 12ins knife - stormed into a home.

Police believe that the gang of five men targeted the home in Voysey Gardens, Pitsea, specifically. The incident is believed to involve drug dealing. 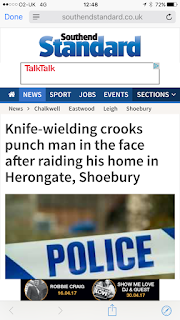 The two suspects, one armed with a knife, broke into a home in Herongate, Shoebury, at about 3.45am on Saturday, where they viciously set upon the man.

They've kept quiet ever since. They have some sense, then....
Posted by JuliaM at 10:30

we as no fear of shanking attaks cos we is alus in us stab vests. that is, er, unless we is garding importent peeps at westminster.

Stab vests only work in certain situations. They aren't a magic bullet.