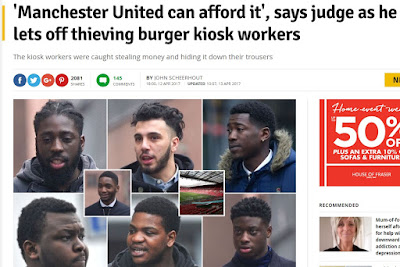 Judge Paul Lawton questioned why the £598 theft case ended up at the crown court and asked: “Manchester United can just about afford it, can’t they?”

The seven defendants, who feared they would be locked up, shared smiles with each other and with friends and family after they were each handed a 12-month conditional discharge.

Some judges have common sense, as can be seen:


None of the defendants had previous convictions, except for Andrade, who was handed a referral order for a conviction for robbery when he was 14.

After the case solicitor Amar Alyas, who represented Belkhair and Oyawaye, said: “They are very remorseful but this should have been dealt with by the district judge (in the magistrates’ court). It’s unfortunate this had to waste precious crown court time.”

What do you think the chances that anyone will hire young blacks are now, Amar?

Not only are they likely to repay you by robbing you blind, the judicial system will reward them, rather than punish them. You'd have to be mad.

Email ThisBlogThis!Share to TwitterShare to FacebookShare to Pinterest
Labels: ffs, justice system, SJWs, the State is not your friend

...'solicitor Amar Alyas, who represented Belkhair and Oyawaye...' says it all.

I hope this rich judge is robbed one day and the crims defence will be "he can afford it"!!!
Perhaps he was a City fan .
Jaded

"I hope this rich judge is robbed one day..."

It's nice to think he'll one day discover what goes around comes around.