"We're Missing Out On The Moolah!"

...I can’t deny that there have been a glut of dramas featuring sexual violence over the last few years, including Emmerdale, Hollyoaks, EastEnders, Apple Tree Yard, National Treasure and Broadchurch. I have 13 years’ experience of working and campaigning within and on behalf of the Rape Crisis movement, including acting as its national spokeswoman for three years, and I find myself defending the trend. Don’t social issues have peak moments in popular culture and is it not just rape’s “turn”?

It peaked last year, love. Now we're all bored with it.


...at least this current generation of depictions has evolved beyond scantily clad young women being chased through dark woods by demonic armed attackers. At least today’s programme-makers consult with specialists, such as Rape Crisis, to ensure their portrayals are realistic.

Eh? I've yet to see a rape case in a drama where a chav off her tits on Bacardi Breezers goes to the police to accuse a random stranger of rape, and has some poor sod banged up until the police get off their arses and check CCTV to find out she was lying.


But here I start to falter. Because the truth is I know the tidal wave of researchers, writers and producers eager to handle sexual violence responsibly is beginning to place a burden on chronically under-resourced and overstretched yet vital support agencies. And incredibly, the vast majority don’t offer to pay these specialists for their expertise.

Why should they, when you're clearly so desperate to push your agenda you'd climb over your own mother's corpse to do it for free? They aren't stupid. You clearly are.


Last year, as the domestic violence storyline on Radio 4’s The Archers became excruciating for listeners, one fan set up a fundraising page in the fictional victim Helen Titchener’s name that has so far raised over £172,000 for Refuge, a charity that supports “the real Helens”. It was a beautiful illustration of how drama can trigger consciousness and prompt action in support of worthy causes.

Translation: "Ah wants me some of dat!"


This year, acclaimed actor Julie Hesmondhalgh, beloved of Corrie fans as Hayley Cropper and brilliant as Broadchurch season three’s main character Trish, gave an exclusive interview to Rape Crisis, which was posted with a donations page for its national helpline. At the time of writing, that page has raised a tenner.

Ahahahahahaha! The best begging appeal news since this one: 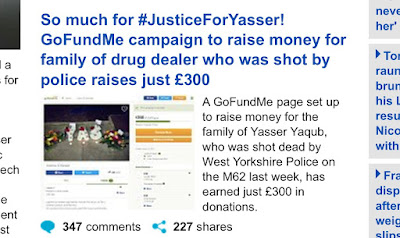 Deep down, do we think survivors aren’t deserving because it’s just a little bit their own fault?


The paradox is that part of the work of Rape Crisis is to challenge myths and prejudices around sexual violence so survivors can access social justice.

Aha. Now we hit the crux of the matter. That's why no-one's prepared to stump up any cash. It's because you're as mad as a box of frogs.

The issue here is justice. Not social. Just justice. That's all that matters.
Posted by JuliaM at 10:30

Also, as numerous people in the comments pointed out, Ms Russell and her colleagues had been too lazy/incompetent to actually publicize the appeal page in question so no one knew it was bloody well there.

Twist after twist there certainly was, but one twist which was NEVER going to come was that one or more of the alleged victims was making it up, even after the police announcement that potential victims should come forward and WOULD be believed.

They always want to change the world, don't they, these social justice warriors AND get paid for it (and not just minimum wage either!). Then they look down their noses at us mere plebs because they're doing something worthwhile, you know, a REAL job, while we are just farting about, earning a crust....

Yep, they've been busted. They're concerned with rape the same way the guys on Stormfront ranting about Philip Green and Robert Maxwell are concerned about pensions. If they really objected to rape per se, they'd be writing about actual rapes, not trying to define down the definition of rape to the point of absurdity. No one can take seriously people who claim the University of Durham is plagued by upper middle class rapists, but won't ever talk about Rotherham.

"..been too lazy/incompetent to actually publicize the appeal page in question ..."

Yup! Some 'social media strategy' there...

"They always want to change the world, don't they, these social justice warriors..."

Or see it burn.

"They're concerned with rape the same way the guys on Stormfront ranting about Philip Green and Robert Maxwell are concerned about pensions."