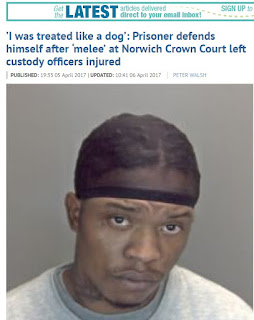 ...then armed cops could turn up and shoot you in the head. It's the new policy for uncontrollable animals.


Giving evidence today Birmingham told Afame Offiah, defending, that he did not assault anyone. He told the court he had been pushed by officers in the back and refused to go in his cell as he felt he was being treated unfairly.

He said: “I thought I’m not going to be a dog and pushed back and grabbed onto the gate.”

Oh, but you are. Did no-one explain the term 'prison' to you?


Another officer, the custody court manager, said he became aware of Blake and Birmingham being brought down following the verdicts. He said they were both “very agitated” and described how Blake, who was “shaking with anger” and Birmingham, who refused to enter his cell, were involved in a melee in the cell area.

He said Birmingham had refused to enter his cell and “barged past” at the same time as Blake “burst out of the toilet area” .

Maybe we should hire ex-United aircrew for our prison service?


Birmingham was in court for the trial but Blake was not as he refused to leave his cell.

Yup, they'd sort this behaviour out in a jiffy!
Posted by JuliaM at 11:00

Custody jobsworths injured by n*****s? I don't believe a word of this, Julia.

Statistics compiled by Mr Plod confirm that n*****s deliberately fall down steps to injure themselves or 'refuse to obey instructions to continue breathing', whilst in custody.

The expert on dealing with scum strikes again. Perhaps if these criminals were up for theft of a lawnmower he might have a bit less sympathy.
Jaded

That WPC Jaded was 'educatid' in a lower stream at Dross End Secondary Modern School, will not surprise regular readers. School reports reserve any indication of her academic ability, to concentrate on pages of illustrated advice to her parents, recommending birth control...and abortion in default.

I hate myself for asking...but what is it with the headgear he is wearing. Could he not afford a whole stocking and so has shoved his head in a popsock?

"I hate myself for asking...but what is it with the headgear he is wearing. Could he not afford a whole stocking and so has shoved his head in a popsock?"