Ryan, 36, barricaded herself inside and refused to surrender after police surrounded the property during the terrifying stand-off in Grimsby, Lincs.

She denied possessing an imitation firearm – an airgun – with intent to cause fear of violence, but was convicted after a trial. Cops, ambulances, helicopters and trained negotiators were called to the dramatic scene on October 8 after Ryan’s bizarre stunt.

She was sentenced to six months in prison at Grimsby Crown Court.


Temporary Detective Constable Tom Kelly said: “I hope she is ashamed of her actions and that the sentence acts as a deterrent to anyone else behaving in such an irresponsible way.”

Yes, this looks like a woman capable of shame, doesn't it? 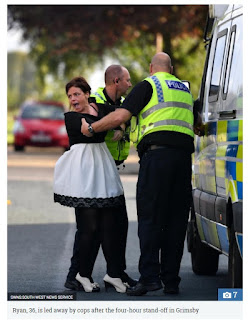 I wonder what she's shouting?

H/T: Rita Panahi via Twitter
Posted by JuliaM at 09:00

Does my bum look big in this?

I think it would in anything! Though it's clearly not as big as her mouth.