Been Watching Too Much US TV, Officer?

“The Police asked my traumatised father-in-law and his poorly elderly wife if they wanted to press charges and go to court.

“They said no - they have neither the strength, or money, nor the ability to face a trial.

“So the Police gave the owner of this dangerous, out of control dog, a warning and told them to keep it in a cage.”

We don't 'press charges' in this country. The state presses them for us. How bloody thick do you have to be to not realise this?


Dr Heley said she believes the dog which attacked Tiny Tim should have been destroyed after it showed such aggression towards another creature.

No doubt people will say 'But it's in its nature!'. You know, like sloth & indolence seems to be in the modern cop's nature...


Cleveland Police were contacted but were unavailable for comment.

How prudent. Luckily, we have other sources of information: 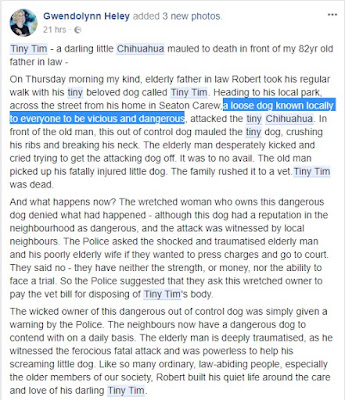 No-one trusts or relies on the police any more. Why would they?
Posted by JuliaM at 09:00

XX We don't 'press charges' in this country. The state presses them for us. XX

But the "state" (CPS,) need a complainant.As it is up to the complainant if the CPS can press charges, or not, makes it, even if around the corner, that the complainant presses charges. May be by remote control, and using the CPS as a tool, but.... (Except for the crimes where the CPS IS the complainant, an those effected are called as witnesses, not complainants. Assault, IIRC is one such.)

Almost unnoticed, contemporary Mr Plod evolved into an intestinal parasite. Shit for brains, never seen and of no practical benefit to his host.

"Except for the crimes where the CPS IS the complainant..."