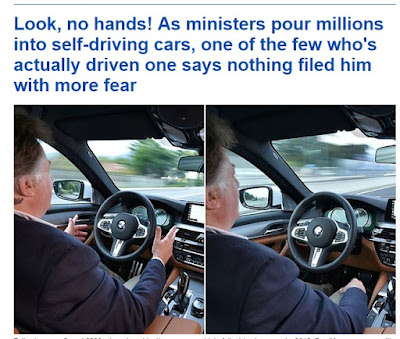 Progress in UK: we employ men to drive driverless cars (like TfL tube trains), instead of men to dig holes then fil them in again.

I'd need to be hammered, lest I be screwed.

It is inevitable but the only way they will get them mainstream is to ban our cars. I see London changing the congestion zone to a unmanned car zone.

It will me a major disruption with many unintended consequences.

They should show how safe they are with the easy kills. Trains, buses and planes.

"...the only way they will get them mainstream is to ban our cars."

Yup, that's the long term plan. Should those Zil Lanes be built now, or later?