Mr Chambers, who was 30, died after being stabbed in the heart with a large combat knife after arranging to meet someone to sell them drugs at the back of a block of flats on June 13.

He was attacked by a 15-year-old boy, who was seen laughing and walking away from the scene with Felou Abadja, 19, the Old Bailey heard.

One dead dealer, two incarcerated street rats. Not for long enough, mind you:


The pair of teenagers were cleared of murder but convicted of manslaughter and having a blade, and have been remanded in custody to be sentenced on February 2.

Yes, clearly, who knew if you stabbed someone in the heart with a combat knife, they'd die? Just an accident. Innit, blud?


Giving evidence, the 16-year-old told jurors he had stabbed Mr Chambers in self-defence with the victim's own knife.

Predictably, the 'victim's' friends turn up in the comments to spew their illiterate tributes to a good man who wasn't doing nuffin', innit? 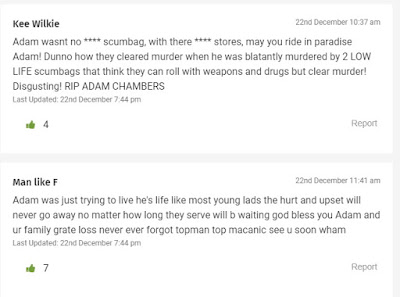 Google Translate's not much help...

But it's when the purported relatives turn up that things get really salty: 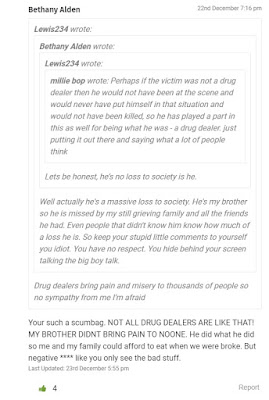 That's a rather interesting take on drug dealing, you'll have to agree...
Posted by JuliaM at 10:30

I may as well be reading about another planet for all I care.

Damn! Although now retired at 68, I never realised that instead of working legitimately all my life to support myself and my dependents, I could have just dealt in drugs for a far easier life with greater income.

I never realised either that you could deal in dope without bringing pain to anyone.

All those missed opportunities.

Already commented on this Julia as I'm sure you noticed!!
Jaded

Very true. I'm glad I live nowhere the chavs & underclass. Closest alt-homeowners here is Army barracks & housing (nice people) on one side, hills & country on other.

However, some should be forcibly moved to permanently live with these "misunderstood victims" - looking at Polly Toynbee & most other Groan, BBC & C4 journos.

"I may as well be reading about another planet for all I care."

Increasingly, that's my view too. But these aliens have a habit of not staying on their home planet.

"Already commented on this Julia as I'm sure you noticed!!"

I did wonder if that was you!