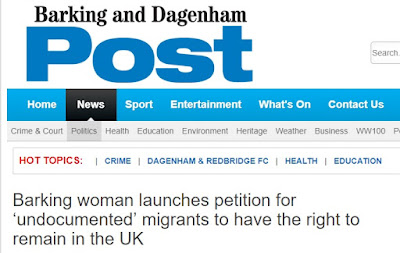 Olubusola Ogunlowo, who lives in Ripple Road, has launched a petition calling for people who have grown up in the UK without holding a British passport to be allowed to remain in the country, progress into higher education and work.

Gosh, I wonder why she wants to see illegal immigrants given the right to live & work here? It's a puzzle, isn't it?


After years of state funded schooling it does not make sense to then cut off all opportunities available to undocumented youngsters once they reach working age, she argues.

“I have met a lot of people in that situation,” she said. “They can’t get a job, they can’t go to university.”

The government “wash their hands” of the youngsters once they reach adulthood, she added.

They shouldn't do that, she's absolutely right. They should find and deport them!


Ms Ogunlowo adds that when young people have no prospects and nothing to keep them busy it can lead to them becoming involved with crime and anti-social behaviour.

If it gets 100,000 signatures it will be considered for a debate in parliament.

The petition has got more than 450 signatures so far, having only started last week.

It's a pity you can't vote these things down, rather than just up.
Posted by JuliaM at 09:00

It won't be long for 10,000 signatures (marks?) appear on a petition. Would you like a false passport at the same time for just an extra £50, Ms Olowangobongo?

For once the headline truly reflects the facts...."barking woman, Olubusola Ogunlowo". How many scrabble points for that name?

Britain is a racist, sexist and thoroughly nasty place, so these people should be encouraged to escape from it at the earliest opportunity.

Merely because they do not have British passports, it does not follow that they are here illegally.

I love your idea of being able to vote against these on-line petitions. Perhaps we could start a petition about it.

You should start a counter petition, I would sign it.
We could discuss the wording on your blog

I'm already getting the popcorn ready!

"How many scrabble points for that name?"

"Merely because they do not have British passports, it does not follow that they are here illegally."

"You should start a counter petition, I would sign it."

Petitions for all! :D