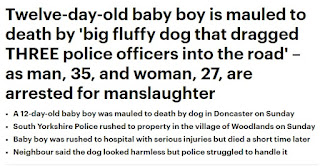 ...they're easier to load in the van if they are dead weight. If you know what I mean.

Assuming your armed fellas are better shots than the ones in the neighbouring farce, that is!

The neighbour said that they didn't know the breed of the dog but that it was 'very big' and 'not something you'd want around small children'.

They also said that the dog had a habit of running into other people's gardens.

And now it gets to languish in police kennels until charges are brought. If they ever are. And of course, the chavshrine is building up outside the house, which (as ever with these stories) looks like the sort of place you'd wipe your feet after leaving: 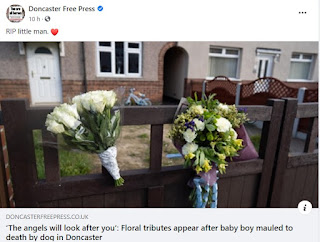 Florists and bloon-sellers will make more of a killing than Rover!
Posted by JuliaM at 09:00

Yet another reason to bring in Clarkson 's Law.
Penseivat

"The angels will look after you."

Might have been an idea for a functioning adult to do some looking after the poor mite in this life.

I hate to spoil a traditional gathering of village bloggers with blazing torches and pitchforks.

The good news is that former police can serve a jurors and it won't be difficult to recruit additional morons to keep Penise company in his Clarkson box.

However corrupt CPS may be, 'there' not as stupid as Mr Plod and these charges will dropped with lesser ones substituted...or I will eat raw dog.

I sometimes feel that the police do 'serve' the public as a boar 'serves' a sow.

Former police shouldn't be allowed to be jurors in a police corruption trial.

Prior to 2003, plod was excluded from jury service. This served the interest of justice by preventing bias and corruption infiltrating jury rooms. A complete U turn by a weak government was the result of frequent shower rapes of ministers by the villainous police federation.

Your analogy of a pig screwing the public captures the present situation very well.

Funnily enough Melvin serving police officers can be called to do jury service now. They have to declare their job when they arrive to the clerk and can't serve if they know any of the participants.
Jaded

You must arrange an introduction forthwith, Jaded. I thought they were all self-serving.

"Yet another reason to bring in Clarkson 's Law."

Watch as the owners escape any kind of justice because 'they've suffered enough'... :/

"Might have been an idea for a functioning adult to do some looking after the poor mite in this life."

Quite! A dog you have to keep outside in a pen isn't a pet, It's a working dog. And I doubt the work this thing did was flushing grouse or herding sheep.