Ex Libris: ‘Saga of The Exiles’

To confirm that it was indeed near death, the great vessel broke through into normal space with lingering slowness. The pain of the usually swift translation was prolonged as well, until the thousand, for all their strength, cursed and wept within their minds and became convinced that they would be trapped. It would be the grey limbo endlessly. That, and pain.

But the Ship was doing its best. Sharing the agony of the passengers, it pushed and pried against the tough fabric of the superficies until there were flickers of black against the grey. The Ship and the people felt their anguish dim into a mere harmony of nearly musical vibrations that echoed, damped, and finally snapped off.

They hung in normal space, stars all around them.


I picked this one up at – of all shops – Woolworths in the Heathway, Dagenham!

Again, the cover was the immediate draw, and I read the first few pages and couldn’t quite ‘get’ the writing style. 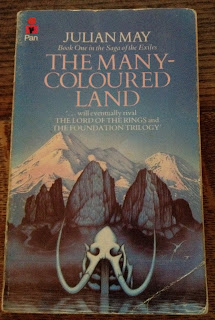 So I put it aside and went on to read something else. Then, about a year or two later, I came back to it. And was immediately hooked! Which, luckily, meant that the sequels had been published in the meantime, and I didn't have the agonising wait that I had to endure for the Galactic Milieu series that served as 'prequel' to the events of these books.

It's one of those series that really repays repeated reading, and most certainly repays eclectic reading - there are so many references and oblique nods to myths, legends, archetypes and even brands that the author ended up publishing a 'Pliocene Companion' to give the background for readers who hadn't perhaps got all the references.

She went on to produce a nifty little space opera series called the 'Rampart Worlds' trilogy, which I enjoyed immensely as well, but also published a few fantasy novels - the Blood Trilluim series - that I just can't get into at all. It seems to me as if they are written by a completely different author.

In a moment of rare serendipity, just the other week a literature account I follow reTweeted the announcement from Tor Books UK that they would be re-releasing these four novels, having first given the cover art a makeover. See what you think here.

Even better, eBook versions will be made available! My cup runneth over...
Posted by JuliaM at 13:30

I realise the current vogue owes more to film conventions of big star name, hook line, title and signature graphic, but that still bears a closer resemblance to food packaging for varieties of breakfast cereal than to books.

What it always says to me is "this is an indifferent product of which the best which can be said is that it is of broadly similar quality to the last packet you bought. If you liked that, you'll like this."

There are times when a simplified convention is suitable; the wonderful JL Carr always produced his books with a nod to the earlier standards of book presentation, but his remain genuine works of art in both image and text.

From your recommendation, the author deserves better covers than this.

There's a (very quiet at the momemnt) Yahoo group for the books that was started back in 2000 over at http://groups.yahoo.com/group/Julian-May-discuss/

I've read all the books by the way - enjoyed them.

Amongst the best SF ever written IMO.

The prequels, possibly for the only time ever, even better than the original series. Not least for the fact that even though the reader should know what was going to happen we had no clue. I don't think I have ever hated a character as much as I did FURY, that thing ... words fail me.

Agree on the Blood Trilliam business, don't know what went wrong there but did very much like the Boreal Moon series if you have not tried it, well worth a go.

I discovered these books quite late - about ten years ago - and was utterly bowled over by the sheer scale of the undertaking - obscure Latin puns, Hermetic philosophy, cosmology, geology, paleontology, psychology, dry wit and a hefty dose of rip-roaring adventure...

Actually, I'm glad I didn't read them when they first came out, since it meant I could read all 4 plus the prequels in one glorious binge - and, in any case, my 17-year-old self would almost certainly have missed many of the erudite allusions you describe.

Haven't read a May book in donkey's yonks. I did enjoy them but the prequels caused me to skip a number of pages when she went on to list all the designer stuff her characters wore, owned or drove. I can only assume she was on retainers for all the brands she managed to squeeze in. It slowed the pace like a lead anchor and was really rather annoying because, being as she went to great lengths to show the reader the characters were extremely wealthy, it should have been a given and was quite irrelevent.

Other than that small hitch I really enjoyed them.

Lynne - I agree with you about the clothes; the tipping point, for me at least, is the wedding scene where every Edwardian-pastiche outfit is described in tedious detail; it seemed so incongruous with what had gone before that I wondered whether the publishers had a hand in it.

The same thing happens in Colleen McCullough's 'First Man in Rome' series, where, after three books focusing on military and political aspects of Roman life under Marius and Sulla, the narrative suddenly veers off into excessively detailed accounts of the female characters' attire.

Indeed - I think they've done quite a good job on bringing these up to date, though I wonder at the prominence of the name rather than the title.

"There's a (very quiet at the momemnt) Yahoo group for the books that was started back in 2000.."

Yes, I have the same one bookmarked! I discovered it back when computers were 386s... ;)

"Agree on the Blood Trilliam business, don't know what went wrong there but did very much like the Boreal Moon series..."

I've seen those, but the BT taster I had put me off! Might try a sample chapter in ebook if available.

"Actually, I'm glad I didn't read them when they first came out, since it meant I could read all 4 plus the prequels in one glorious binge.."

That's just how I felt when, as a result of the HBO series, I got into 'Game Of Thrones'!

Sadly, the author is still ahead of me. *sigh*

"I did enjoy them but the prequels caused me to skip a number of pages when she went on to list all the designer stuff her characters wore, owned or drove."

Oh, I always love those touches!

"..it seemed so incongruous with what had gone before that I wondered whether the publishers had a hand in it."

I wonder why? Did some 'focus group' tell them it was a winner with readers?

Surely no 'Game of Thrones' comment is complete without another link to this...

Aiken Drum for First Minister - that would sort the SNP out!