VJD Smith is a feminist mother of two who works in publishing and, clearly, is concerned - deeply - about mental illness:

You see, if you point out that letting dangerous lunatics roam free isn't a very good idea, you are being hateful and judgemental!

Why, the possibility of having your head sawn off by one of the careless with the community guinea pigs just adds a soupçon of excitement to your day, clearly...


I'm almost certainly being unfair – after all, there is still a dire lack of support networks – but that was how it felt to me. I felt less afraid of the illness, devastating though the consequences were and continue to be, than I did of other people's prejudice.

It's a drearily familiar refrain.


Two decades later, I'm more aware than ever of how isolating a schizophrenia diagnosis can be. Just because you're paranoid doesn't mean they're not all out to get you, and the vulnerability of those suffering from severe mental illness makes them an easy target.

Mmmm. I think I know who is 'vulnerable' here: 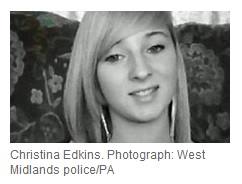 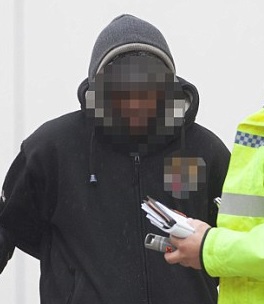 Oh, and a special mention for the arrogance of Inspector Gadget, who long before the suspect was sectioned (genuine, or a good defence ploy?) was insisting in his blog and on Twitter that of course this was another 'care in the community' case, because, well, it stands to reason, innit?

The defence most love him on the stand!
Posted by JuliaM at 11:05

Or alternatively if you're the Guardian/BBC, tragic & vulnerable MONA abandoned to the streets by Evil Tory Kutz.

I weep for the poor girl and her family.

VJD Smith is a feminist mother of two

I guess her loony friend doesn't get asked to do the babysitting much, also they'd probably benefit from a more balanced Weltanshauung than they'd get from their feminist mother.

Imagine if one of them is a boy.
"Put down that stick, Evelyn! It looks like a weapon of war and a huge, engorged phallus! Now go press your flowers"

I should not be so harsh. More than 20 years ago someone close to me had to get checked out for VD (not VJD). But luckily I - sorry, he - was clear.

or as many of my former and erstwhile dinosaur colleagues said...another nutty spade. Poor girl, wrong place and wrong time. The murderer will no doubt be known to police, social services and a host of medical people. Some doctor, somewhere probably decreed that he wasn't mad but had a personality disorder, some magistrate didn't bang him up - but no doubt the police are to blame. Have a walk around any 'vibrant' black area in the Uk and you'll see plenty more, walking about, limbs jerking, shouting to themselves....and no, they're not all on the phone to Nigeria. One place where the african Caribbean male population seems well over represented is in the 'nutty spade' community. More prisons? Yes. More secure units? yes.
I won't apologies for my views and having spent the day in Brixton last week my fears seem perfectly OK - the place was heaving with scary, mad looking black MALES.

Ranter spot on.
The side effects of cannabis misuse I would guess.
I just hope one of my colleagues didn't have an interaction with Mr Mad in the 24 hours previous to this horrible crime or he will be for the high jump (Daily Mail template looming).
Jaded

To my surprise the 12.15 bulletin on BBC1 described the, then still at large, suspect as "black".
I assume that the person to blame has now been appointed as Head of the Wastepaper-basket Strategy Task Force on a six figure salary.


Coincidentally enough, my wife was attacked by a black male after she went to assist a young female colleague who was worried about a man following her off a bus.
Luckily she can handle herself and managed to fend him off until some security guards from the nearby shopping centre tackled and restrained him.
A few weeks later she got a letter from the Police explaining that the lad had been sectioned under the mental health act…

Black people are more prone to suffer from mental illness

So I've heard say. But how much of that is due to being made paranoid of whites by race hustlers, or due to too much weed, I wouldn't like to guess.

Indeed back in the early 80's there was a big campaign to stop the police using Section 136 of the Mental Health Act because, of course, they were using it in a racist way to unlawfully detain and imprison innocent young black men going about their business viz. robbing, dipping or generally wandering around with knives and machetes - - guns weren't an 'issue' back then.....'appy daze!

"I guess her loony friend doesn't get asked to do the babysitting much.."

That'd be terribly judgemental of her, wouldn't it?

Where are you safe these days?

"The side effects of cannabis misuse I would guess."

" But how much of that is due to being made paranoid of whites by race hustlers, or due to too much weed, I wouldn't like to guess."

Oddly enough, though I live in a very 'black' area, almost all the cannabis-stinking passers-by that come to my attention are...white.

Do they too suffer these effects?

@ Ranter
"Indeed back in the early 80's there was a big campaign to stop the police using Section 136 of the Mental Health Act because,....."
....plod had already acquired its reputation for Institutional abuse.

Corrupting every legal power with which the service had been entrusted, was the peerless track record plod gifted to campaigners.

For someone yet to master English, a plea for translation is a greedy serving of ambition, WC Jaded.

XX VJD Smith is a feminist....XX And what had V.D Smiths sexuality got to do with the case?