Not A Penny For The RSPCA, No, Never, Not A Single Penny…

A baby deer is in danger of being injured after becoming trapped in an east Hull recycling plant. The wild animal has been spotted in Cleartech Waste Services on Sutton Fields Industrial Estate for two weeks.

The photos clearly show it’s a sub-adult male, only enough to grow a pretty decent set of antlers, for a roe deer. Not exactly Bambi. Certainly not ‘a fawn’ as the picture caption reads.

But still, it’s in a place it shouldn’t be, it’s clearly in need of assistance, so who ya gonna call?


When workers phoned the RSPCA they were told the charity could not catch the deer unless it was injured.

Because the charity that lobbied for legislation throughout the Labour government’s term because they wanted to be able to intervene before harm occurred to pets think the opposite when it comes to wild animals.


Contracts manager Gabrielle Allen said: "We are disappointed nobody seems able to do anything about it.

"I have been told unless it is hurt or trapped and unable to move nobody can be sent out to free it.

"The site has a 4m fence running around the entire perimeter so there is nowhere for it to get out apart from the main gate which leads straight onto a very busy main road.

"We have tried to send it out but even when the traffic is quiet it is difficult and it just runs off."

Which is why you think a specialist in animal welfare would be of some help. Understandable.


He said the Stockholm Road facility is not a safe place for the deer as there are trucks, forklifts and other machinery being driven about at all times.

"There are about 12 vehicles coming in and out of the site on an average day," he said. "It's only a matter of time before it gets injured.

"We've contacted various agencies and even the police to see if anybody can come and get it but we are getting nowhere."

Just tell the RSPCA you’ve contacted the media. They’ll break their own necks trying to get there then…


"The only water it can drink is from puddles in the yard," she said. And there is only a very small grassed area for the deer to eat from and it has no shelter.

"Everybody is worried about it.

"We are desperate for someone to help us get this deer to a safe place before it injures itself or ends up killed. "

The statement from the ‘charity’ themselves is breathtaking in its cluelessness and inability to actually listen to the problem and address the actual concerns. It's almost as bad as Argyll & Bute's ham-fisted attempt to explain away their bullying of a nine-year-old girl yesterday:


A RSPCA spokesman said: "We were called about a deer wandering around the recycling facility on Thursday, June 7.

"An officer advised the staff to 'shepherd' the deer out of the facility when it opened at 6am, and before the traffic started."


"The deer was reportedly healthy and uninjured."

Yes. At the moment. That might not continue, if the poor beast isn’t removed.


"Deer are wild animals and obviously roam as they please."

Well, thanks for stating the blindingly obvious, there.


"This particular location is surrounded by a forest."

Is it? Really? Did you think to maybe check Google Maps before saying that? 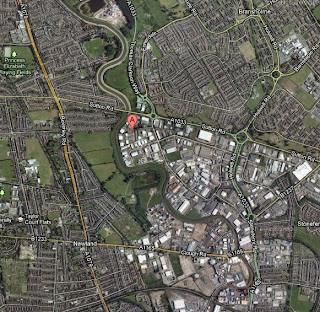 If a tree falls in this 'forest', you ain't gonna hear it over the articulated lorries!

"All wild animals are better left alone unless they are sick or injured and it is illegal under the Wildlife and Countryside Act 1981 to remove a wild animal or bird from it's environment unless it is suffering."

I think you’ll find you’d be on a sticky wicket trying to argue that ‘its environment’ included a recycling facility, FFS..


"Deer, in particular, are very timid creatures which are generally scared of people and do not respond well to captivity."

No-one’s talking about putting it in a zoo, and it’s the fact that it’s already IN ‘captivity’ that’s the problem..


The RSPCA has advised the plant to call its cruelty line again to see if somebody will assist them in removing the deer.

Eh? Why should they have to call you - again?

You’ve been told, via the medium of this newspaper article, to which you’ve responded with your usual patronising boilerplate statement.

If the deer is old enough to eat I am sure the local poacher will get rid of it pretty quickly.

Maybe someone should check the staff canteen in a few days? Roe deer is delicious!

hi you to on the rspca pay list can't be bothered to get off your ars?