Abner Marsh rapped the head of his hickory walking stick smartly on the hotel desk to get the clerk’s attention. ‘I’m here to see a man named York’, he said. ‘Josh York, I believe he calls himself. You got such a man here?’

The clerk was an elderly man with spectacles. He jumped at the sound of the rap, then turned and spied Marsh and smiled. ‘Why, it’s Cap’n Marsh’, he said amiably. ‘Ain’t seen you for half a year, Cap’n. Heard about your misfortune, though. Terrible, just terrible. I been here since ’36 and I never seen no ice jam like that one.’

I’m pretty sure this one’s another book from a trip to ‘Forbidden Planet’ in London. 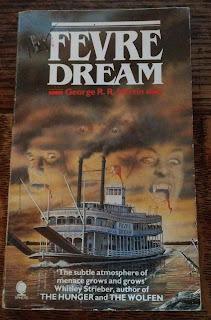 And for those who are hooked by George RR Martin's 'Game of Thrones' TV adaptation, it'll seem a rather curious book to have been penned by the same author. Vampires on the Mississippi..? Are you kidding me?

And yet...it works! It showcases his growing talent for writing characters you care about because of, and in spite of, their flaws. And it clearly must have been well researched, because it immerses you into the past and the history of its setting like no other novel.

It would be nice to think the success of 'Game Of Thrones' meant hungry TV studio execs would cast their eyes over this one. If they didn't screw it up, it could be good, so very, very good.
Posted by JuliaM at 13:30

I thought I might comment here, being a recent 'convert' to George RR Martin. I haven't read this tome, but, following the TV adaptation of 'Game of Thrones' I read all five of that series and thoroughly enjoyed them.

My wife has been an avid reader of Martin, and I had seen the books lying around the house, but not being a great reader of SF or 'Fantasy' for many years, had ignored them. Then 'Game of Thrones' appeared on Sky and although I found the story at times fairly confusing with its plethora of characters and locations, found it quite captivating - sort of 'Wars of the Roses' meets 'Dune'. I then thought I would start to read the story as the second series began its showing and found it difficult to put down. One of the great things I have found, as my wife pointed out, was the way Martin is quite willing to set up 'heroes' and then kill them off. I am now waiting on the sixth book of the series, though it could be some time coming!

Anyway, I think I will have a look at some of Martin's other works like this one that you highlight.

I too never got into the 'Song Of Ice & Fire' series until I saw the first few episodes - can't wait for the next book now!


On the topic of bizarre plots, a dark psychedelic dye, added to plod shirts, causes the wearer to perceive white sticks as Katanas; table legs as Kalashnikovs and mobile phones as hand grenades.

'The Uniforms of Terror' blasting away at a Book Shop near you.