Well, This Was ‘Daily Mail’ Bait From The Start, Wasn’t It?

A new computer games controller that could be mistaken for a real gun is set for release early next year.

The Delta Six controller for video games like Call of Duty looks frighteningly similar to a genuine firearm, with its inventor claiming 'the only way to get more real is to enlist'.

Which reminds me – it’s that time of year again! 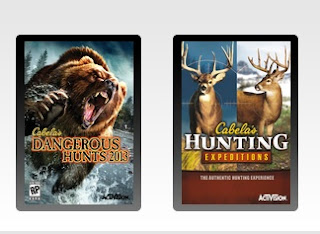 Will I be disappointed again, and immediately switch back to ‘The Hunter’?

But back to the frothing report on this controller:


… the device is intended to give players of First-Person Shooting (FPS) games a more immersive experience than has been possible so far.

However, the imminent release of the hyper-realistic add-on is bound to raise fears that computer games encourage violent behaviour among the young.

Well, of course it is. There are, it seems, hundreds of people just waiting for a story like this to confirm their suspicions and push their agenda. God forbid the ‘Mail’ should disappoint them!

Other manufacturers don't go in for the hyper-realism, of course: 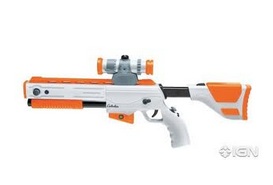 
With a built-in accelerometer that its makers say can be used in any game without calibration, it aims like a real gun without the need for a receiver on top of the user's television set. The controller also features a range of pressure switches, one of which can automatically switch the game to precision aiming mode by simply holding the device up to the user's cheek.

Other functions include a faux recoil simulation that makes it judder like it's spitting lead from the muzzle, and a real-life style reloading function in the gadget's magazine.

It sounds much more attractive than the new gun controller for Cabela’s games, which adds a rather naff ‘pulsometer’. I’d rather have the simulated recoil function!


The Delta Six is the brainchild of David Kotkin, who is well known in gaming circles for his Avenger joypad mod. … Mr Kotkin's company says preliminary testing has shown that the Delta Six is easier and faster to use than a standard controller for FPS-style games.

This type of controller is certainly far better than the gamepad. But I doubt it’ll make me any better at the fast-paced FPS type games…
Posted by JuliaM at 14:05

AS an ageing, boring old fart (otherwise referred to with contempt as "a baby boomer" although somewhere along the way I seem to have missed out on some of things "we" are supposed to have - like that pension which ensures at least 4 2 months getaways to somewhere nice meaning I only have to spend 4 months of the year in my UK multi-million mansion ...) I can well remember, when we were but wee sprouts and cash was hard to come by we used to manufacture our "toy guns" out of bits of scrap wood, using nails and the like, and sometimes paint them. And we used to point them at people during game play and go "bang". Thing is I am not aware of anyone from that group who later went on to become a gun-fixated psychopath, and oh yes, we had quite a large selection of "gun oriented tales of derring do to read, listen to and especially watch, because just about every fillum, on either TV or at the flea-pit was either about brave cowboys ridding the west of the scourge of the redskin or brave british tommies taking on and besting, with much carnage and high body counts (I believe that is the correct modern parlance) the might of the Third Reich ... but what do I know, that is only apocryphal reminiscence, not "science" so ...

Some people say that such realistic guns should have orange muzzles so that they aren't mistaken for a real gun. But then all that will mean is the real guns will be painted orange and the police will just leave the criminal alone thinking it's just a toy. So they say that no gun should be allowed on the street. Well I've never seen a gun on the street, but it doesn't stop them being used om the street. All such laws mean is that people can't take their legal guns to the range or club from their home. It never stops real criminals.

".. we used to manufacture our "toy guns" out of bits of scrap wood, using nails and the like, and sometimes paint them. And we used to point them at people during game play and go "bang". "

"All such laws mean is that people can't take their legal guns to the range or club from their home. It never stops real criminals."

Some people say that such realistic guns should have orange muzzles so that they aren't mistaken for a real gun.

Yes, I've been pointing this out for some time... How long before criminals just daub their real guns with orange paint?

When my nephew was born my sister was insistent that he wouldn't have guns to play with - never bought him any or 'violent' toys...

He simply ate bread or toast into the shape of a gun and used that instead - and now he is somewhat obsessed by guns and the war...

I was obsessed with the A-Bomb when I was a kid, I've since built a few in my shed*. Naturally, I've painted the warheads orange to comply with Security Directive EU34TF/A6/2002

* To be used only as a last resort; like when Sky+ doesn't record The Simpsons etc

"He simply ate bread or toast into the shape of a gun and used that instead..."

"* To be used only as a last resort; like when Sky+ doesn't record The Simpsons etc"

The jury will understand....