Well, For One Thing, The Hole's Much Bigger...

A professional body piercer has warned about the risks of having your ear pierced with a gun rather than a needle. 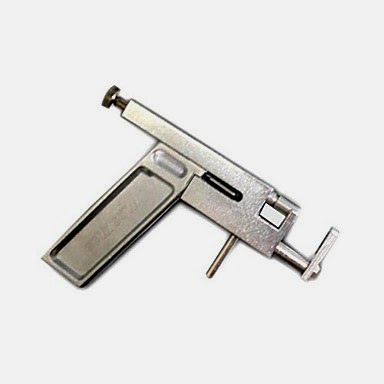 Well, it is Croydon!


Penny Burrows, who works at Time Bomb, in Croydon, said the procedure is less hygienic and can lead to infection.

Her intervention follows the news that supermarket worker Laura Scott had to seek medical treatment when her ear cartilage became swollen the day after it was pierced with gun at James Jewellery, in Church Street, Croydon.

And does the gun wielder accept responsibility? Why, strangely, no...


A spokesman for the store, who identified himself as the manager, blamed Miss Scott for the infection.

He told the Advertiser: "If they [customers] don't look after it then it's their responsibility.

"It down to the customer to clean and look after it. You'd be surprised what people do with their fingers. If they are not clean the infection can spread into the ear.

Naturally, Miss Burrows, being a professional needle wielder, is a bit of a (specialised) hoplophobe:


"Guns are extremely bad," said Miss Burrows. "They are not hygienic at all. It gets very frustrating when people don't understand that.

"Needles are a lot safer because everything is one use. Needles are used and they go straight in the bin, whereas you can't properly sterilise a gun.

"I stood outside one parlour in Croydon that uses guns and watched their procedures, and cross-contamination was horrific.

"There's also an issue with the studs used, which have a butterfly back and are always put on too tight.

"Sometimes I understand where a piercer is coming from when they say it's the customer's fault, because every now and again it can be.

"But a good piercer will own up if they do something wrong."

Email ThisBlogThis!Share to TwitterShare to FacebookShare to Pinterest
Labels: Croydon, What the hell is wrong with people?

So both my ears should have dropped off by now?

A hot nail and cork works...

Oh, I'm a bit disappointed now, I thought you might be discussing the relative sizes of sinkholes due to erosion and collapsed mine shafts.

A little story:
Many years ago I worked in a jewelers. I have, indeed pierced ears myself but the task was usually undertaken by my partner in crime. We, of course had the stud gun & La Burrows is, of course, perfectly correct. The best choice for a piercing is the sleeper ring which can be turned & the wound kept clean. But the store manager is also correct. The majority of the infections result from the recipients fiddling with the stud with filthy fingers.
This was back in the days when it first became popular for males to sport earrings. Now we used to pierce the ears of young girls. Not with great enthusiasm but better a shop than Mum with a needle & cork. And never, never babies. That's sick. But one never heard a murmur of complaint from the young lasses. Squirt of freezer. Twang. And out they went proudly with their new earrings to show off to their friends. The lads had a difference experience to look forward to.
First was the "You won't be wanting the freezer will you? Tough guy like you's not bothered by a little prick"
Shaking of head with paling features.
Then the taking of an old stained darning needle, broken off at the eye & the ostentatious sharpening with a foot long rough file. If proceedings went as far as the actual piercing, it was palmed & the correct one inserted in the piercing tool. But the bets on the dead faint collapse from the stool had already been taken & regularly won.

Earlobe piercing with a gun is one thing. Cartilage piercing?! Having had the former once, all others, including the 5 cartilage piercings I sport, have been done with needles by specialists. Given the unique challenge of forcing through the tragus, for example, I would not want the likes of Saturday Chantelle in charge of target practice.

I stood outside one parlour in Croydon that uses guns and watched their procedures, and cross-contamination was horrific.

But despite that the silly cow proceeded to have her ears pierced...with a gun?

Clearly one of those turkeys who would cheerfully vote for Christmas.

"So both my ears should have dropped off by now?"

"... I thought you might be discussing the relative sizes of sinkholes..."

"Then the taking of an old stained darning needle, broken off at the eye & the ostentatious sharpening with a foot long rough file."