Let's Blame The Police For The Things They Could Have Anticipated...

...and not for the things they couldn't possibly have foreseen: 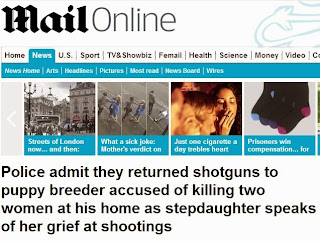 We don't know why they were seized in the first place, but police clearly satisfied themselves that there had been no breach of the licensing rules and so had to return them. And it's a hell of a leap from illegal or unethical dog breeding to multiple homicide.

On the other hand, if you have a piece of street filth whose illegal pitbulls have already shown a propensity for violence, it'd be nice if you acted then, before they tore a young girl's face off in the street:


Blackfriars Crown Court heard how one of the dogs was allowed to continue walking the streets of Camden despite a history of violence.

Earlier last year on August 6, one of Curtis’ dogs chased a cat into a residential property on the Denyer estate, off Highgate Road, Dartmouth Park, biting a man inside the property before killing the cat.

As a result of the incident on December 4, police launched a review of all previous allegations of dog bites in Camden.

Four officers are currently the subject of an internal investigation relating to the August incident.

They probably won't be dismissed from the force. But they should be.
Posted by JuliaM at 09:00

The nub of the multiple shootings relates to official rearming of Mr Lowe to facilitate the alleged murders. For all the euphemism entails, he was a person 'known to police' and reports lead us to presume the suspect had previously threatened to shoot Christine and Lucy Lee, who protested at suffering allegedly inflicted on animals in Mr Lowe's care.

Reminiscent of Inspector Gary Weddell (unbelievably bailed on a murder charge) who was oddly afforded liberty to pursue shooting expeditions which included blasting his mother-in-law to death on her doorstep, because she was due to give evidence against him.

Sus scrofa have sufficient intelligence to have anticipated either scenario.

They SHOULD be? A great soundbite Julia but pray tell what each individual officer has done that merits dismissal? You have inside information on their wrong-doings? No didn't think so.
As for you Melvin,can I have Saturdays lottery numbers please as you can clearly see into the future.
Jaded the radiator boy.

"As for you Melvin,can I have Saturdays lottery numbers please..."

Melvin I know you are losing it but there are six numbers in the lottery.Ask nursey to get you a ticket so you can upgrade your room in the home if you win.
Jaded

What a malcontent you are, Jaded.

Failure to specify the precise lottery of your interest led to substitute results. And what better gift than knowledge of the Met Redundancy Draw?

Not in the same league as the Dunblane cock ups, or ought that be cocks up?

"...reports lead us to presume the suspect had previously threatened to shoot Christine and Lucy Lee..."

I find it hard to believe that wouldn't have prevented the return of the guns, to be fair.

"...but pray tell what each individual officer has done that merits dismissal? "

And that's the crux of the problem.

Once again Julia I ask you directly what each officer has done/not done to merit sacking.No soundbites,just evidence please.You of all people seem to believe in the rule of law,or is that not for police officers?
Jaded

Julia
It is reasonable to assume that most employees are paid for their thinking ability but you have mistaken Jaded for one of them.

Well, Jaded, I'd have thought that the fact a little girl had her face torn apart by an illegal pitbull which the police knew about from a previous savaging of an innocent member of the public was sufficient?

I mean, did they not take heed of the lesson from Stratford? Or did they merely note the PNC so that - should they have to visit the gentleman - they themselves would be aware of the danger?

But don't worry, I doubt they'll be sacked. They never are, are they?