Another Day, Another Pressure Group…

There are huge disparities in the outcomes of young people in different London boroughs, according to the Children’s Rights Alliance for England.

That’s because there are huge disparities in the behaviours of ‘young people’ in different London boroughs. Though don’t worry, the other areas are fast catching up!


The report also states that police in London tasered children 131 times between 2008 and 2012. But 40 per cent of the taserings took place in just four boroughs - Croydon, Southwark, Lambeth and Lewisham.

Well, yes. That’s because those ‘children’ are quite likely to be animals. 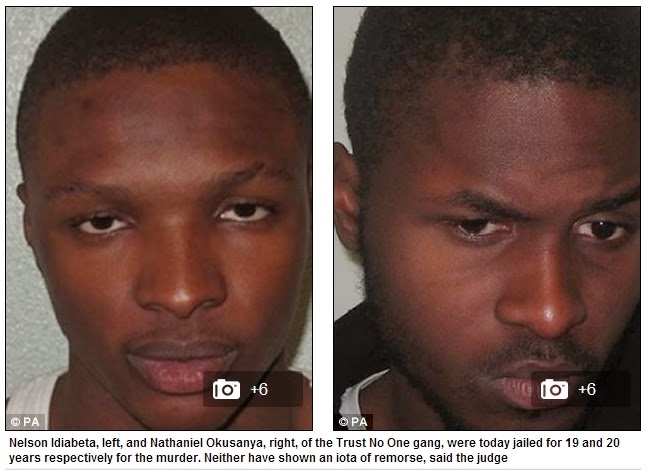 Two examples of vulnerable children who shouldn't be shot with Tasers...

And I’d be just as happy for the police to use real bullets, frankly.
Posted by JuliaM at 10:45

Ah yes tasering of "children",that old chestnut.The DM today is wailing about juveniles being strip-searched,apparently if you get stabbed by an under 17 year old it doesn't hurt!.
I'm sure some armchair experts will be on here later telling me how to do my job.
Jaded

How do they define children today? Up to 18 years old or is it based on their standard of education? If the latter then some of them must be 30+.

And these are the 'children' the left want the age of criminal responsibility raised for. Thing about police, guns and dead scum - it gets the same left wing apologists and paranoid schizos from Huddersfield in a bit of a tizz.

I wish tazering affected the gonads long term. These lads look like absent father material to me if they get a chance to reproduce.

Oh, would that be another taxpayer funded 'charity' perchance ?

Morons can and will, hurl obscenities at villains in a tumbrel. The real problem to castigate is the production line growth in the capital's lawless nightmare.

For every criminal caught and imprisoned, a new brace emerges. And even if the Met were competent and corruption free, what lies far beyond the reach of plods like Jaded and Ranter, is the ability - or even the inclination, to make any difference.

Our Judicial system is not fit for purpose but it remains part of the solution. On the other hand a totally ineffective police service can at best, be no more than part of the problem.

Mercury dumdums just the job for the 'Children's Rights Alliance for England' and maybe just for the two young gentlemen in the photos. Strangely enough I thought we had rights for everyone in England, possibly not if you are white, but rights for everyone else. So if a police officer tasers me by mistake I am going to use my common law rights to make sure I get recompense. Equally if a police officer is pointing a taser at me, I will be complying with their requests, because I am not a moron.

It's all in the language. "Children" is used when vulnerability is to be conveyed, "kids" when empowerment is desired. Classic NLP, neural linguistic programming. Even I find myself subject to subtle reprogramming.

Thanks for the advice again Melvin.Perhaps you should worry about the competency of your own local police force who it seems cannot even solve the simple theft of a lawnmower.Oh the humanity!!
Jaded.

" Equally if a police officer is pointing a taser at me, I will be complying with their requests, because I am not a moron. "

This! This is what we used to call 'common sense'. Hell, I'd go as far as to say that no 'sane' person would ever let any kind of confrontation with a police officer even get to the stage that he draws his ray gun or calls Armed Response.

The police man may be an evil fascist cunt but you sort it out AFTER you have complied.

Alot of today's YOOFF -and not only my own kids-seem to have problems with that concept, with the concept that "No one ever won an argument with a police officer".

Sadly, on the days that these 'kids' actually went to school, they would have been told time and time again about their rights by the left wing f*cktards our society has allowed to be teachers. Unfortunately, they are never told about their responsibilities.
Good post Melv. Can you translate that into intelligent English please?
Penseivat

@Jaded
A prominent 'dark' feature of your personality is the emotional high you derive from taunting others to cause real or imagined suffering.
Yet recruitment procedures supposedly filter plod applicants predisposed to such deviant conduct. Perhaps you were rejected as a result of screening or by disciplinary action?
Abnormal pleasures which may date back to early childhood, are at the root of your continued impersonation of a male in uniform.

"How do they define children today?"

Well, those two would qualify!

"Oh, would that be another taxpayer funded 'charity' perchance ?"

Got it in one!