And Finally, In Today’s ‘Of Course It Bloody Well Isn’t!’ News… 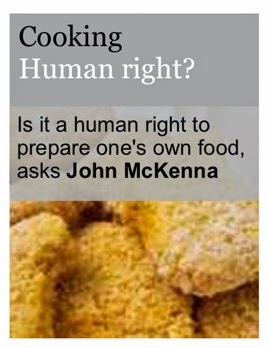 … the sad fact is that the right to cook is not a right recognised by the Irish government, at least not under the strictures of its Direct Provision (DP) regulations, as they are applied to the few thousand asylum seekers who are housed in dozens of locations around Ireland, awaiting a decision of their application for refugee status.

Well, d’uh! Good lord, of all the phony claimed ‘human rights’ of the progressives, I think that one may just be the dumbest…


Many people over recent years have commented on the unfairness and unsuitability of the system of DP. But it seems to me that while there have been complaints about the quality of food served to the residents – “A steady stream of chicken nuggets, white rice, ketchup, vegetables and chips daily, and a distinct lack of toddler appropriate foods,” was how Ronit Lentin, of Trinity College, Dublin, described the fayre back in 2012 – there is a bigger issue here than simply what is served three times a day to the residents as they wait for years to hear if they will be granted refugee status.

When NASC, the Irish Immigrant Support Centre, examined the food experiences of asylum seekers in Cork in their paper What’s Food Got To Do With It?, their first finding was that “food provided in DP is not satisfactory”. That’s what one would have expected, but it is the following conclusions that show the true depth of the problem: “Food does not represent the cultural and multi-faith religious needs of asylum seekers living in DP centres in Cork city. The food system in DP has a negative impact on the families and children who are residents of direct provision centres.”

So…they’ve travelled to Ireland from a dangerous situation in their home countries, usually by extremely dangerous routes, and when they get here, while their claims are being assessed, they are housed and fed – for free!

And they are complaining about the quality of the food..?


Under the DP system, residents are served food three times daily, but they are not allowed to cook their own food. No chapattis for the family from Pakistan. No pounded yam for the Nigerians. No breakfast of tea and canjeero for the Somalis. Instead of these staple foods that people love and crave, the system gives them chicken nuggets, ketchup and lots of chips.

Well, yes. Compared to the supposed terror they’ve fled – fled for their very lives, as they claim – then being given ‘culturally inappropriate food’ is hardly going to raise much of a concern, is it?


The effects of the so-called western diet on people who are used to traditional diets has been studied for the past century and, as Michael Pollan has written, “wherever in the world people gave up their traditional way of eating and adopted the western diet, there soon followed a predictable series of western diseases, including obesity, diabetes, cardiovascular diseases and cancer”.

As opposed to the certainty of the starvation, beheading, forced marriage that they are supposedly leaving behind? Sounds like a bargain to me!


I think we need to take the system of DP, and what it does to people and their families who are waiting in the asylum process, very personally. Just think of how you would react, if every morning you were offered rice, miso and umeboshi pickles, instead of your favourite cereal or that beloved boiled egg and a hot cup of tea?

If I’d scrambled aboard a packed plane or boat leaving the country ahead of a war or religious persecution, I’d probably feel it was manna from heaven!


In mid-2014, there are more than 50 million displaced refugees throughout the world, the greatest number since the second world war. Ireland in the past has had a proud history of supporting the oppressed. With the DP system, however, Ireland stands indicted of denying the most helpless people the most fundamental right: the right to cook.

Once they get their claim decided, they can either make a new life in Ireland (and cook) or go back to wherever they came from (and cook).
Posted by JuliaM at 09:35

I would have thought chicken nuggets etc were very much culturally appropriate - being the foods of the culture these people chose to join.

I'm hoping they get sent back to their homeland where they can exercise their culinary skills ad nauseum. I reckon its curry.

Clearly the humane thing to do is return these people whence they came to resume enjoyment of their vittle human rights.

The right to cook your own food now. Next, the right to cook it over a dung fire (flavour is everything). Where the Hell is Ireland going to source the particular dung favoured by each of their guests? Perhaps asylum seekers could bring their dung with them. Ok, I hear what you are saying, this would make it easier to sniff out the illegals. I say this is the way forward, more dung choice, this is truly Progressive. Power to the people, dung to the masses.

"...being the foods of the culture these people chose to join."

"Next, the right to cook it over a dung fire (flavour is everything)."